Countdown To The Northern California Tour

San Diego Coast to Crest Ride. Well, Some Of It

Ken is a great guy. He is the organizer of an occasional bike overnight camp trip in San Diego, using social media to make them happen. If that sounds informal, it is. I missed Ken’s most recent trip: a ride through Carrizo Plain National Monument at the peak of California’s wildflower bloom this year. But then he organized an overnighter on the Coast to Crest Trail in San Diego, and I was able to make it to that.

The Coast to Crest Trail is an ambitious project to link together and expand an existing trail network, creating a 70 mile continuous off pavement trail from Del Mar to Julian, CA. It is not your typical bikepacking fare. It is a credit to the San Diego area to establish a trail like this amidst the urban sprawl, groomed suburban landscapes, established ranches/farms and other infrastructure. At the time I write this, it is about 2/3 done. A section of about 3 miles had just recently opened. That was enough of an excuse to organize a group and ride the whole route.

After a series of emails, Facebook messages, text messages and the like, Ken put the plan together. A group of 6 of us would shuttle or get dropped off in the lovely mountain village of Julian early on the morning of May 5. So our version of the ride was the Crest to Coast trail (reverse of Coast to Crest, get it?), which has the benefit of being a net elevation loss. But even in that direction the trail still features plenty of climbing.

After a shuttle ride from the beach I met everyone in Julian staging for the ride. The weather was wonderful, everyone was prepared, and after some introductions we were riding.

The ride started well for me, I was feeling strong and climbing better than average. I like to think my recent cross training and weight loss were showing their affects. Early in the ride we made a detour for a photo-op at an entry to a wilderness area, which means by definition bikes were not allowed. But we stopped at the entrance sign then turned around. I must be some kind of local San Diego ritual, I guess.

We wrapped up the early pavement section by turning left into the Santa Ysabel Preserve, which was nothing less than resplendent as it was covered in far more green than usual, its streams flowed with water, and temps were ideal for riding. Which was good since the route did feature some climbing there. We navigated around sandy sections, ruts and cows as we went. I reached the top of one of the early climbs in time to take pics of everyone as they passed by.

We exited Santa Ysabel and regrouped in a meeting that included Carl’s family, which was utterly charming as his young daughter held a gate open for us and made sure Dad had enough water. From there the route took us along the paved Highway 79 and Mesa Grande road. They climbed steadily and did not always offer much of a bike lane or extra space for riders. But traffic was sparse and fairly polite. The paved section ended at a classic backcountry landmark, an abandoned general store in Mesa Grande.

From the General Store we struck out on Black Canyon Road. It is a wide fast gravel road that is covered in, ironically, white gravel. It was a long steady descent that gave us views of a rocky gorge with flowing water (a big deal in these parts) alongside the road in a few places. We regrouped at our right turn onto Santa Ysabel Truck Trail and decided to take a side trip to Lake Sutherland. This is where my energy level started fading fast. The rest of the group powered up the steady climb to Sutherland dam, but I made no effort to keep up. By the time I arrived they had had their fill of the scenery and were ready to head back down. I have seen the lake several times before with the assistance of my motorcycle. It is odd how climbs seem so much bigger on the bicycle.

By the time we hit the truck trail I was needing to get off and walk over the steep sections that trail is dotted with. The group I was riding with was great though. I was not the only one that was fading. Carl and Dan, who were still going strong, did a combination of waiting and taking more challenging options to keep the group together in spite of our widely varying speeds.

Day 1 ended with us setting up a legal wild / dispersed camp on Cleveland National Forest land. Ken had gone out the night before and buried a cache of water, beer and assorted other goodies that was much appreciated by all of us when we got to the end of the day.

We spent the evening drinking, cooking, and sharing food and stories. Interestingly, the middle of our camp turned out to have a hummingbird nest in it. My plan was to camp under the tree, but after the momma hummer buzzed me a few times we saw her tiny nest I relocated my camp site. The group gave the tree and the tiny mommy a little extra space.

While sitting around the campground that night, I casually mentioned that I needed to be at LAX the next day by 5 pm. To my surprise, that remark was greeted by confused looks from everyone. Once they realized I was not joking, they all said there was no way I would be able to do Sunday’s ride and get to LAX by that time. I had looked at the ride profile and figured that day 1 would be the hard day, and day 2 would be a relatively fast descent to the beach. But I found out that day 2 was more difficult than day 1.

So I changed my plans. I would ride with the group for the first part of the day on Sunday, then break off and finish as a road ride into Solana Beach. That would give me more than enough time for my scheduled arrival at LAX.

The next morning I saw once again that we were a pretty compatible group of riders. No one got up super early, waiting around impatiently. And no one had to be awakened while we all stood around geared up and ready to ride. Nice.

Day 2 continued on the Santa Ysabel Truck Trail, and true to my plan, I said good bye to the band of merry men at Highway 78 and continued to Solana Beach on the road by myself. The route I took was gorgeous, but Rancho Santa Fe’s beautiful wood lined rural roads have zero room for cyclists. I should have made my way to a familiar route that included San Diequito Road. But the route I took did feature a lot of new scenery for me so it was good for that.

Also on the ride I encountered the famous Belgian Waffle Ride that was taking place that day. I was not impressed. I was riding in the Lake Hodges area where there were families, children, elderly, etc. The Ride is a race, and not a closed course race, but racers were mixing it up with non racers anyway, and the racers I saw had zero regard for anyone but themselves. They kept going full speed through crowded areas, yelling at other trail users to get out of their way. I didn’t see anyone get hurt and I am sure many of them posted personal records to Strava.

The road into Solana Beach finally sprouted a bike lane, and I descended into the cool sunny beach town where my car was waiting safely in the parking lot where I had left it. Mission complete.

This ride was, among other things, a shakedown for my tour starting June 15 in northern California, including redwood country, Pacific Coast Highway and San Francisco. I presumed that if my bike and I could deal with an off road ride, then we could deal with a road tour. And deal we did. I look forward to that ride now feeling well prepared. And to the next local ride with a bunch of new friends. 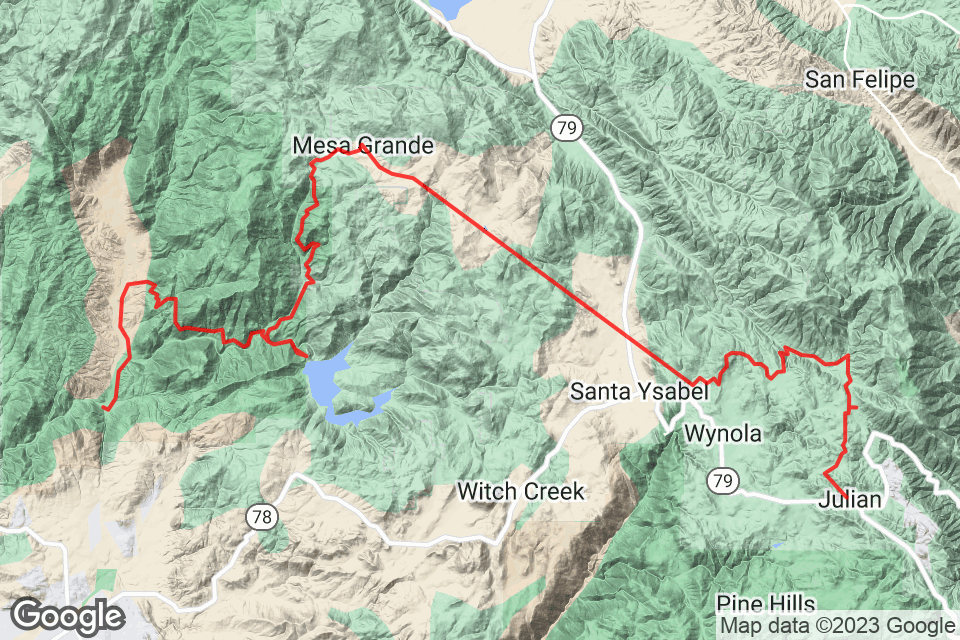 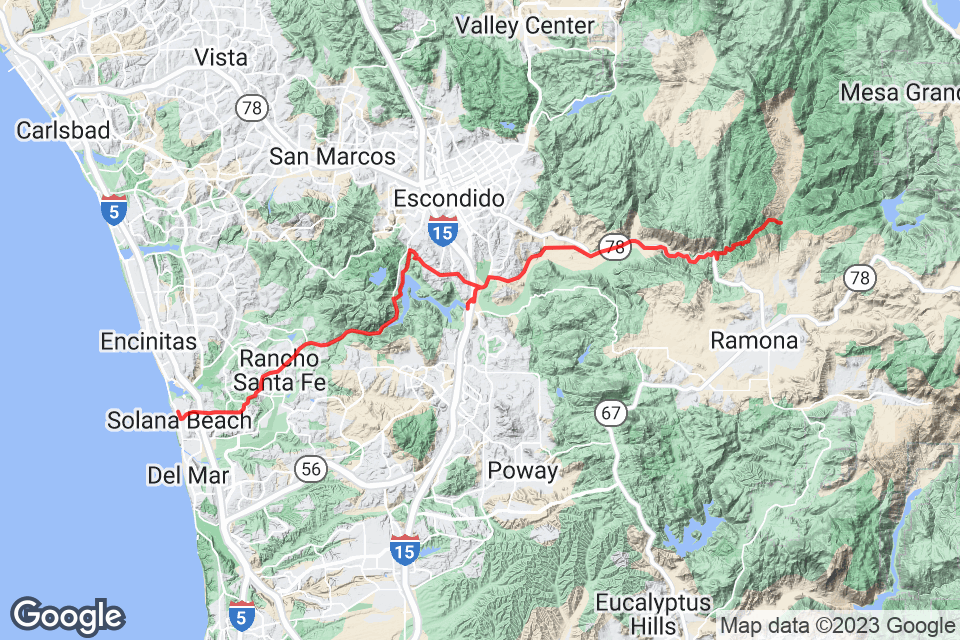