The Strand On the Los Angeles Coast to Sycamore Canyon Overnighter, July 2015

This is another throwback blog of a ride I took a while ago.  The route was simple: to ride the entire length of “The Strand”, continue along  Pacific Coast Highway (PCH) to Point Mugu State Park and camp at a Sycamore Canyon, then retrace my route back the next day. 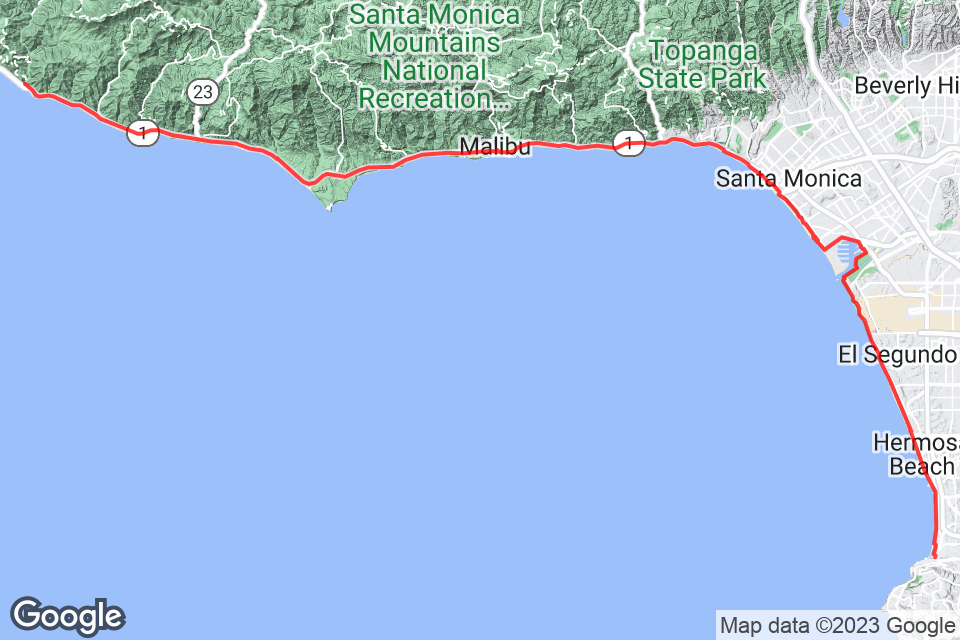 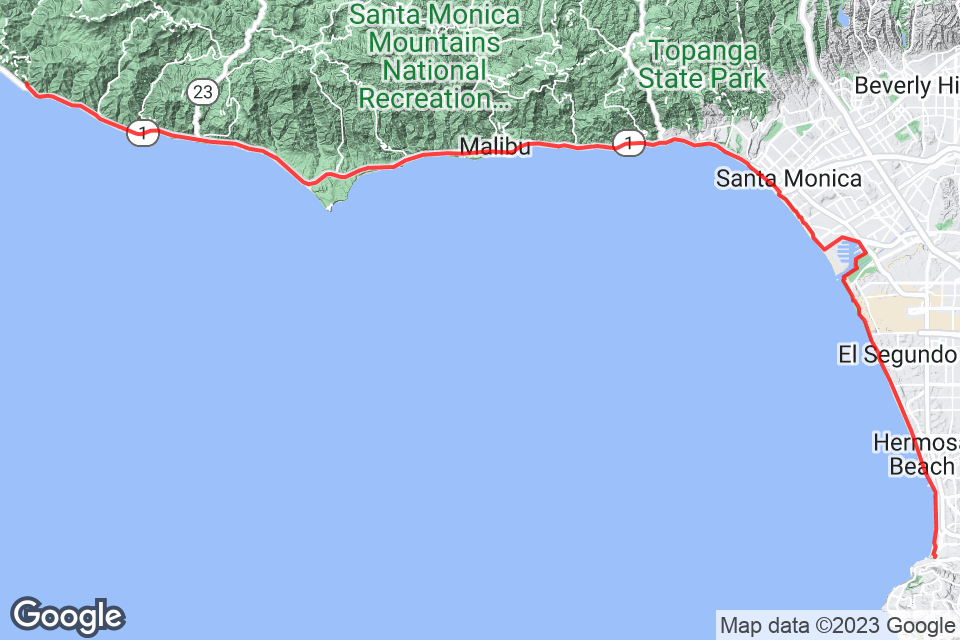 “The Strand” is the name of the paved beach bike trail along the Pacific coast west of Los Angeles. It has been given the official name of Marvin Braude Bike Trail, but I have never heard it called that. Although if you want to look it up on Wikipedia, use the formal name. The southern end is in Torrance and the northern end is in Pacific Palisades. In many sections there  are two paved trails: one for bikes and one for pedestrians. The Strand takes you past many famous places you have probably seen in movies and TV many times. It takes you under planes taking off from  LAX International airport, it gets routed onto surface streets in a few sections, cuts inland around Marina Del Ray Harbor, and is in general a great touristy ride. You should not be in a hurry along The Strand. In addition to all the sights to take in there are lots of beach cruisers, children on bikes, pets on leashes, rollerbladers, etc. that can wander all over the trail. It is best to slow down for traffic and enjoy the scenery for most of the 22 miles.

I chose to ride on July 2-3 for a couple of reasons. It was easy to get time off of work around the 4th of July holiday. And I had hoped that there would be a good level of beach activity at that time, i.e. not too much, but not abandoned either.

I drove to Palos Verdes to an area where it looked like it would be safe and legal to park overnight. It turns out it was: I did not get any tickets, towing, theft, vandalism, etc.  I wanted to ride The Strand from end to end, and it began with a relatively steep drop from surface streets to the trail and a cute place called Perry’s Cafe and Beach Rentals.

Perry’s Cafe was my welcome to The Strand

Perry’s set the tone for the entire Strand. There are hundreds of great places to stop and eat. You could spend days to cover The Strand if you wanted to. I planned to have lunch at one of the places that was right on the sand where I could stay in my bike clothes and sit outside.

Even though I got a later start than I wanted, it was still too early for most beach goers and the trail was not heavily traveled. It made for smoother sailing but fewer people watching and sightseeing opportunities. There was almost no one at muscle beach, for example. The timing of Day 2 would be better for beach hubbub.

Will Rogers Beach marked the northern terminus of the trail where I got dumped unceremoniously onto  Pacific Coast Highway or PCH. It was time for a complete shift in my riding attitude. There is a bike lane and room for bikes along this stretch of PCH, but there is a lot of parallel parking along the road, driveways and drivers who did not want to give me the space I needed to ride. I stuck it out, and the farther north I went along the road, the thinner traffic got. Making it through and past Malibu was a turning point, but it came at quite a price. The hills of Malibu were steep and plentiful, and my touring gear weight made them even tougher, of course.

Taking a break at Legacy Park in Malibu

I stopped at the last place available on the route to buy food so I could get something to make for dinner at the campsite later. It was a small high-end grocery where I was able to get a nice steak and a Starbucks was located in the same plaza. That is where I discovered I was not as prepared for the trip as I thought I was, financially anyway. I had lost my main credit card a few days earlier, so I brought along my gas credit card as a backup and some cash. It turned out the gas card was not a credit card at all and I could only use it at the one brand of gas station. I had no ATM access either so I made do with the cash I had, which was barely enough if I skipped a couple of luxuries I was planning on. I did have my phone and Starbucks app, however.

Two Ends of the Spectrum

While at my final stop before camping, I encountered a slice of Malibu in a nutshell.

The pic may not capture it, but in person the Mercedes had a Barbie toy paint job. It was being driven by a teenage girl and the SUV was obviously hers. She may have been a child star with the means to pay for something like that herself. Or it may have been a gift from her parents. But either way, having that much stuff at that age is usually a recipe for disaster. Call me jealous if you like, but child stars and rich kids rarely grow up happy, balanced people. I hoped she was among those that appreciated what she had. I appreciated my less flashy vehicle and continued north.

Ethan and Bella (Ethan is the human), my hike or bike campsite buds

I rolled into Sycamore campground and set up camp in the “Hike or Bike” area. Many California State Parks designate a few small campsites as Hike or Bike sites. They are cheap and can only be used for one night for hikers or bikers passing through. The only other camper in the sites was Ethan, who was hiking the coast. We spent a long time talking. I would not be surprised to see a documentary about him on TV someday. He had great stories to tell and was living a minimalist lifestyle that allowed him to explore the world. He had recently been interviewed by a group that was making a film about something else, but they took a detour from their activities to talk to Ethan.

I won’t say that I thought about eating too much on this trip, but I did think about it a lot and I decided to go fancy.  I was happy with the results. Sorry if you are a vegetarian.

I was really roughing it on this trip

The return trip wasn’t unremarkable, but it was the trip from the day before in reverse. Even though I was on the ocean side of PCH, I wanted to focus on getting back so I did not stop to take any pictures. It is amazing to me how different a ride looks when you go back the way you came. More so on a bike than when driving a car. Perhaps because you see so much more on a bike, seeing it from a different angle makes a bigger difference and makes everything new again.