A Podcast Interview About My Coastal Tour

I awoke to the luxury of a hotel room on Friday, day 7 of my 9 day tour. I was enjoying camping every other night but the hotel was a nice change of pace. My room had clean clothes hanging over every available spot and I had leftovers from the meal at the restaurant in the hotel the night before waiting in the tiny refrigerator. As much as I was enjoying the hotel, the ride ahead was beckoning and I was too excited to have a lazy morning. I had ridden the Pacific Coast Route before but this time I was taking a new route through the wine country in this area.

Central Coast Outdoors (CCO), the company that shuttled me around the Highway 1 closure, recommended riding through wine country. My reaction was “Wine country? That is farther north, right?” Wrong. There is a huge wine country south of the central coastal region and it is growing fast. And it is beautiful country to ride through.

My route that day was the longest riding day of my tour. I planned to do 60+ miles of riding and 3000+ feet of elevation gain. Fortunately I was “riding myself into shape” as fellow tourers call it and I felt ready for it. I had also changed my destination at the recommendation of Mandy from CCO. There were 3 campgrounds to choose from on my way into Santa Barbara: Giaviota, Refugio and El Capitan. I was originally going to stay at Gaviota, but I changed my destination to Refugio State Beach for that day, adding some miles to my ride.

I got an early start as usual. The weather was sunny and cool all day, perfect for riding. Santa Maria is a small town and the hotel was on its outskirts, so I was quickly riding in a rural setting. The early route centered around Foxen Canyon Road. The roads I took much of the day did not have a bike lane, but traffic was almost non existent. The few cars that passed me were happy to give me a lot of room.

In the middle of rugged back country with no gas stations, traffic lights or even intersections I encountered a wine tasting location. It was basically a nice shed set up in the front of a home. Then another. Then a huge fancy one.

The never ending row of vineyards ended as I rode into Los Olivos. It was one of many towns I rode through that I had never heard of before, but was a pleasant surprise. Not knowing if there would be another good stop, I got some important supplies for the day while I was there.

Somewhere in town the route turned into an actual official named bike lane which was a pleasant change. It wound its way along more charming back roads on its way to the mother lode of all tourism in the area: the city of Solvang. It is known for its Danish themed architecture and loads of great options for eating, drinking and sightseeing. And, for us cyclists, the annual Solvang Century ride.

I left Solvang by taking Alisal Road. It is a gorgeous narrow road out of town and it cuts off much of the riding on US-101, which is basically a freeway open to bikes. But any ride south from Solvang involves a lot of climbing. It is not shown as a through road on all maps, but Alisal does connect as a bike route to Old Coast Highway and US-101 as I write this, even if your map shows the road closed to cars. I made the big left turn to get on US-101 and I was rewarded with a long steady descent to the coast. If you look at that stretch and notice a tunnel, be aware that the tunnel is only on one side of the freeway, the northbound side, and it is an uphill grade. There was no tunnel on the southbound side where I was. I pushed past Gaviota and on to Refugio. There is a very short bridge on that section with no shoulder for bikes so you have to get out in the lane. It had loads of “Share The Road” warning signs with big pictures of bicycles on them, but I got honked at anyway, which actually amused me more than anything.

The conditions in Refugio were windy, but I found out that was pretty normal. The campground has a small store with very limited hours, i.e. it was not open at all while I was there. The shower facilities were very nice and right next to the Hike or Bike campsite. The campground was full with family reunions and large groups camping together. I was able to score some ice and get a few family history lessons about camping in Refugio.

After settling in I was joined by Nick at the Hike or Bike area. We exchanged notes about camping equipment and I let him know I thought it would be very nice to live close to all the great campgrounds in the area. It was good to know that it was not lost on Nick, who clearly enjoyed it.

As usual I was ready to go to sleep as soon as the sunset permitted it. I definitely did not wear out any of the batteries in my headlamp. Falling asleep to the sound of waves crashing on the beach after a long day of riding and great experiences seemed to be a formula for a good night’s sleep, indeed. 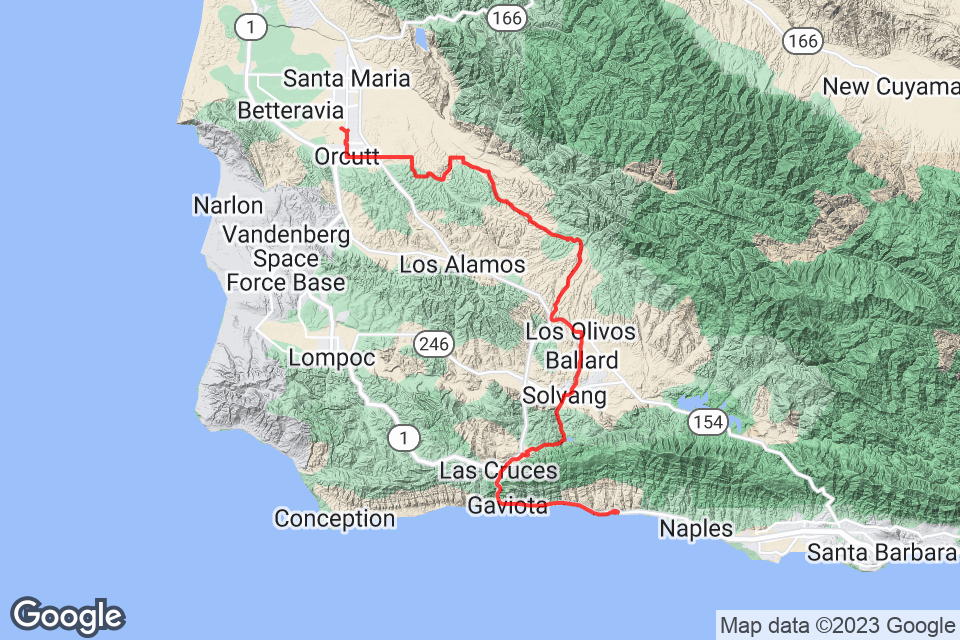