It has been a while since I have blogged on a ride, but certainly not since I have ridden. I busted out the camera for a blog and it’s time to share a few local secrets from this gravel ride.

My current gravel steed is a Diamondback Haanjo Carbon 7c. It is not included on most lists of gravel bikes to consider and that is a shame, but it is OK by me. I have updated most everything on my ‘jo, giving it a Di2 drivetrain and a second wheelset: a 27.5s with NoTubes Crest Mk2 rims and Project321 hubs with magnetic pawls. The frame is worthy of the good stuff, and the bike surprises me with how light it is every time I portage it over a stream. The hubs have so little spinning resistance they feel like they actually accelerate for a moment when I start to coast. The Schwalbe Thunder Burt 2.1 tires are the absolute biggest you can cram into the frame and fork, and I don’t recommend them for when it is mucky out: there is so little tire clearance that the abrasion of normal amounts of mud against the frame/forks would be worrisome. But for a dry dusty ride like this one they were no problem, as long as your wheel dish/truing is spot on. And since I build my own wheels I make double sure it always is.

I once again plotted out my ride using RideWithGPS. I had a few goals: a lot of dirt, climb on pavement and descent on gravel, and stop at Docent Brewing in San Juan Capistrano, adjacent to a groomed dirt trail near the end. Consider it crushed. 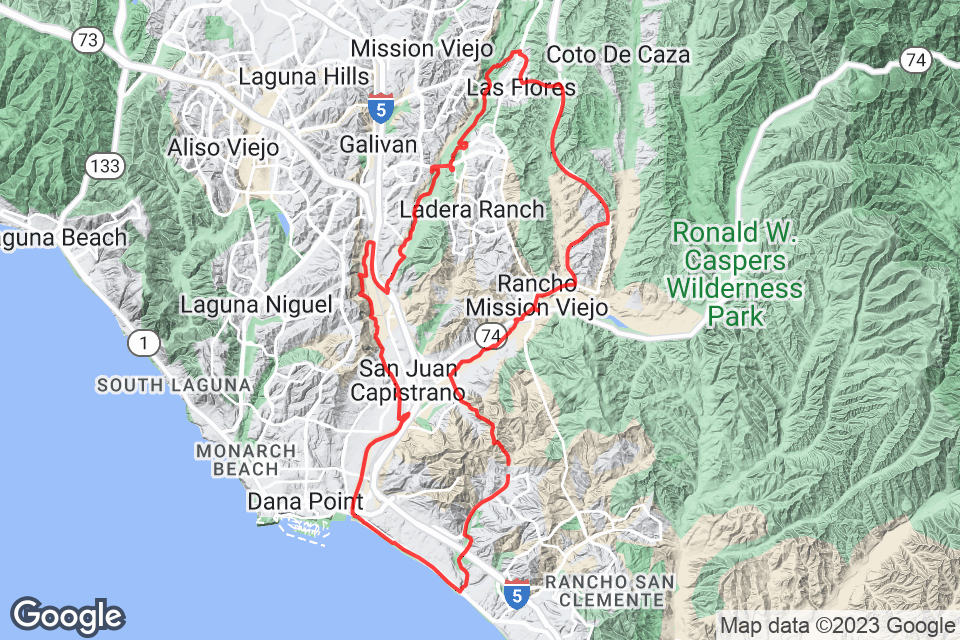 My climbing took me through Rancho Mission Viejo and on to Rancho Santa Margarita including the Patronnes Parkway bike lane. The lane is a mixed bag: it is a bike only route, but it is adjacent to a road that is for all practical purposes a freeway and separated by only a low cable fence. I had no problem with it, but it may not be for everyone, I get that. The main climbing was complete somewhere along Meandering Trail where I “summited” and descended quickly to Arroyo Trabuco.

During the drop into the arroyo a mechanical issue reared its ugly head. Under hard braking the fork got into resonance where it shook violently. It was easily remedied by lifting off the front brake momentarily and getting back on it a little lighter. It was manageable but far from optimal. I checked the adjustment of the thru axle and headset. It did not feel like those issues, which I am familiar with, and those adjustments were just fine. I am pretty sure it is a brake caliper/pad/rotor issue. The fork has been fine and the front brakes squeak for a moment when first applied, and that indicates vibration and less than optimal braking. I could have stopped and adjusted the caliper position but it was not worth interrupting the ride: I was in a good place and riding a wave of positive energy. I was not going to let an edge case brake issue get in the way.

There are several ways down the Arroyo. I chose the less technical route which allowed me to make a relatively easy stop at Starbucks. I am stuck on Nitro cold brews right now. I had a different brew planned for later.

After ‘bucks I crossed the arroyo and dropped back in at my now-not-so-secret entrance, which gives access to more nice gravel riding. It used to be more straight up gravel riding. Then a season of rains caused the road to get washed out by Trabuco Creek that flows at the bottom of arroyo. During the rains it swelled into raging torrent and rearranged the landscape. An army of bulldozers attempted to tame the creek and put the gravel road back in place. It worked for a while. But the little creek had other plans and it shifted again, taking out the new road. Fortunately riders, hikers and equestrians have rerouted the path through the area and it is great fun now, with maybe a few patches of deep, loose gravel across what used to be a road, or a streambed or whatever. All great fun.

I continued south out of the arroyo and made my way to the Oso Creek area, which is another local secret for gravel riders. I entered at the Saddleback Church campus, which is a lovely, green, shaded and historic. The trail through the Oso Creek basin passes along an area that I am pretty sure is going to calve off like some kind of glacier and drop a huge section of real estate into the creek. The trail follows a crack that goes deep and then the terrain slopes downward toward a cliff at the creek. Time will tell. Oso Creek merges with Trabuco Creek (the little untameable bitch of stream from earlier), then that merges with Horno Creek. And along the banks of the San Juan Creek trail is where I stopped for lunch at Docent Brewery.

I finished the ride at a slower pace after Docent, but it was worth it. The ride along the beach is a circus of humanity and full of riders, runners, children, skateboarders, drunks, you name it. It is best to take it slow through there. The final leg back home is familiar ground, of course. As usual when I complete a big loop like this I want to make a few changes and ride it again soon, which I am sure I will.