I awoke on the morning of day 4 in Westpoint Union State Park greeted by a classic California coastal scene visible outside of my tent. From the seaside bluff where my campsite was set up, light fog drifted lazily up from the beach below, cresting in slow motion wave over my campsite. The warmth of the morning sun poked through the fog here and there, but it was still a little cold and damp at ground level, so I stayed under my vestibule as the morning grew warmer and my tent dried off.

I was pretty excited about the route that day. This was another relatively short day and I planned to take my time riding bike only coastal trails and spending time in the scenic towns of Fort Bragg and Mendocino, among others. I got packed and I was riding early as usual.

The partially collapsed road that runs through Westpoint Union State Park used to be either the main road through the state park or Shoreline Highway itself, I was not sure. But the California coast was having its way with the road. The steep cliff down to the ocean was advancing inland over time, causing the road to either break apart as the land underneath it shifted, or completely fall into the ocean dozens of feet below. Where the road was completely gone there were hiking/biking trails to skirt around the missing sections. 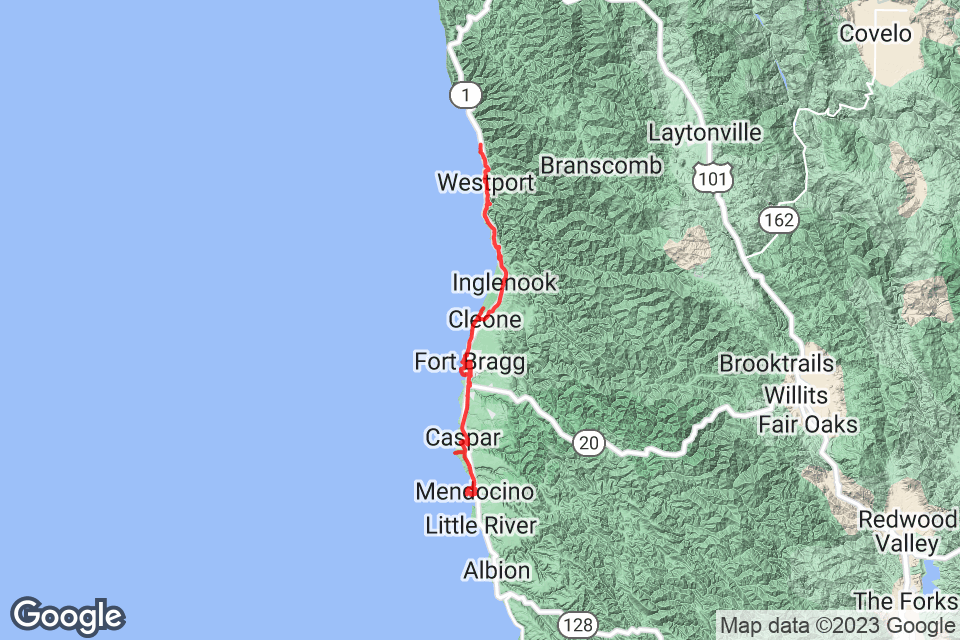 As I continued down the road I discovered the park had another section of campsites. The camp host had instructed me to stay in the section where I had stayed. But maybe some of the other riders that I had hoped to meet had stayed in this last section. The park did not have any specific hike or bike spots as far as I could tell. This other section was bigger and had more people camping there, but it was still primitive, pit toilet only camping.

I eventually had to get back on the main road, which meant the occasional fast vehicle that did not move over for me at all, but they were few and far between.

The little village of Westport was the first bit of town of any kind that I had encountered since early the day before. The quaint little hotels were abuzz with activity and people coming and going. I stopped at the market in town and ate a hobbitesque second breakfast since my supplies from the day before didn’t go far enough. The market was a meeting place for people in town and local gossip was flying fast and thick while I was there. They were very familiar with seeing people riding the coast on bikes and were ready with sandwiches, water, candy and other goodies.

Back on the road, the rolling terrain to south clung to the ocean cliffs at times, then it wandered inland to ranches, hilly estates and groves of eucalyptus and birch trees. In a few places the trees covered the road in a full canopy, windswept and leaning inland, looking like they were planted that way intentionally to serve as a windbreak.

I was enjoying the scenery so much that I missed my “exit” in the little hamlet of Cleone that lead me down to a beach trail identified on the map as “Mackerricher State Park Road”. But it was a paved bike trail. I doubled back on the trail and rode the section I had missed so as not to miss any of it.

It was great to be down at the ocean level for the scenery as I rode, but it came at the price of a steady headwind. The trail that began in Cleone continued into Fort Bragg. It actually did too good of a job of keeping riders away from traffic because I missed the city of Fort Bragg completely. So I detoured back into town to make a few planned stops, including a sporting goods store, a bike shop and the Skunk Train. I wanted to stop at a deli for lunch, but the directions and recommendations I got in town were confusing, at least to my hungry brain, and there was a big construction project on the main street through down. I decided there would be plenty of other opportunities to grab a sandwich farther down the road, so I continued south out of Fort Bragg.

The little town of Caspar turned out to be a cute little village worth a visit. A little market nestled in the Caspar Headlands State Park was where I stopped and ate. As usually happened, getting some calories in me revived me and I was ready to push on. I kept off the main route and headed to the Cabrillo Lighthouse, which still has a spinning lamp atop it, a shop in the bottom, and homes that were once residences for lighthouse operators that are maintained and can be rented out for a stay.

Mendocino was the next and final town of the day. This was my night to stay in a hotel. I plan my trips with one night per week in the luxury of a hotel, it is a good chance to get me and my gear really clean and dry. Mendocino is an absolute gem of a town. Like Fort Bragg, the bike paths between the town and the ocean are not to be missed, even if they are not the most efficient way to travel through the area. The coast there was rugged and windswept with few, if any, sandy beaches.

Riding into the village itself, I rode up and down the streets of the downtown area, not wanting to miss any of the quaint shops, museums and restaurants. I eventually wound my way up the hill to my hotel for the night, and it was a welcome sight indeed. It had no on site restaurant or laundry. So I rolled back downhill to the local market for what I needed. The locals all knew each other and used the market as much as a meeting place as a place to buy food. No one seemed to be in a big rush. Back in the room I used the bathtub as a wash basin and hung everything out to dry around the room. I even had internet quality cell service, something I did not take for granted anywhere during the trip. I did my daily check in with my family, enjoyed the food from the market, and even did a little video streaming, but I did not last long. Sleep came fast and easily as it always does while bike touring.