Searching For Giants From The Sky: Getting To The Start Of My Northern California Bike Tour

Eureka, I Found The Giants! Day 1 Of the 2019 Northern California Bike Tour

Day 1 started as expected: in a cute coastal town with overcast damp weather. I was pleased to find that I had not forgotten anything, which I usually do on bike tours. I would not be 100% sure until I made camp for the night, but it was “so far, so good.” I made a quick stop at the local drug store for a few extra items and I hit the Waterfront trail. The trail kept me off of the roads and traffic of Eureka, but too well, so I took some detours off the trail to explore old town and have breakfast.

The first side trip I made was for the Carson Mansion, which is well worth a quick side trip to check out.

Farther down the trail, a visit to the old town area and breakfast were on the agenda. The Greene Leaf was having a gourmet brunch on Saturday, but I was happy with a classic egg combo. I leaned my bike against the front window and was able to see it while I ate. So far I had avoided locking my bike while keeping is secure.

Old town had a lot to see, even before most places were open, so I pedaled around the area to make sure I didn’t miss anything then continued my journey south.

I passed through so many other small towns that day: Loleta, Fortuna, Rio Dell, and Scotia. You can see most of them in my video. But somehow Scotia escaped all of my efforts to record it. It was a very well kept little town and it used the Eel River for industry – mining and logging. Logging trucks were very active along the roads I was riding.

Riding conditions that day were dominated by the tailwinds, which were welcome as always. Winds from the north are the prevalent conditions in the area, and they are why most cyclists riding the Pacific Coast Route take it from north to south. I passed a group of 3 riders that were fixing a flat while I was on a freeway section. I checked in with them and they said they had everything they needed.

I finally arrived at the feature of the day, the Avenue Of The Giants: a presumptuously named road to be sure, but it lives up to its name. Going from the sunny warm open highway to the canopy of enormous trees so suddenly was overwhelming. I had to stop and compose myself and embrace the whole thing as I was getting downright emotional about it.

While Redwoods dominate the scenery, they are interrupted briefly and occasionally along the road by private farms, run down residences, RV parks and a few tiny villages. My plan was to get food at a market in the village of Weott close to Burlington camp. But all of the locals that I asked about supplies said there was no store in Weott. This in spite of the fact that I looked it up on line and even did a virtual drive by of the place. But Internet based information is notoriously inaccurate in a place like this where cell service, let alone internet access, was rare. So I stocked up with a sandwich early. The little market in Weott was there, however. and I stopped in for supplies. When I told the owner about how no locals seemed to know the store existed, her face collapsed. After recovering she thanked me profusely and grabbed a phone as I walked out of the place, I can only presume it was to call all of her local contacts and get the word out.

That night, as I planned, I camped among redwoods at the hiker/biker camp site at Burlington Campground. I was joined by many other riders including the three that a saw along the freeway. It is always nice to see riders that you encounter during the day with mechanicals join you at the end of the day. I had dinner with Luic and Alison. Luic is teacher from Quebec, a native French speaker. Alison is a social worker from British Columbia. We talked about a wide range of topics including the French language, homeless and the opioid problem, teaching/learning in a professional setting, accents, travel cooking, and the best route to take on a touring bike to get across Los Angeles. I am usually pretty talkative, but the beauty of the surroundings and residual endorphins kicked in and made me an even more enthusiastic conversationalist than usual.

As I set up camp I was very happy to discover no forgotten items. The campsite had good enough cell service for cellular data, so I cozied up after dark and streamed and surfed my way to sleep under a canopy of giants. 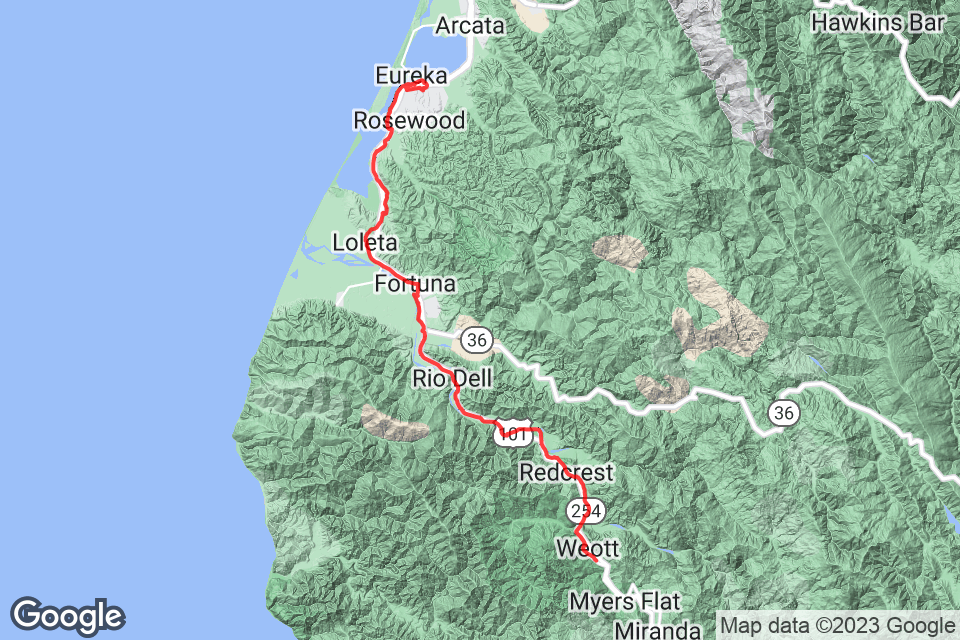