On Day 3 I awoke to an empty campsite, though there had been another cyclist there the night before: Reuben. But I knew that Bigfoot had not scared him away during the night. Reuben had left camp early for something far scarier: the climb from Leggett.

To be fair, Leggett IS the biggest climb along the Pacific Coast Route. Accounts of cyclist tours often portray it as truly horrific. But I looked at the elevation profile before my ride and I saw that Leggett was smaller than the big climbs you encounter on most tours in the US. The elevation profile showed two separate climbs, so it is broken up into pieces as well. How tough could it be?

I got a relatively early start and stopped less than a mile down the road in Cooks Valley for supplies and “breakfast”: an egg panini, virtually identical to dinner the night before. My food supply was low, and that was a result of me not stopping for food in Garberville the day before as I had planned. It was nice to know that I would survive if I did not stick to my super detailed plans. My plans were not meant to be rigid, but rather to keep me from ending up without a source of water for a day or having a similar crisis.

The approach to Leggett was full of smaller hills and was a steady uphill grade that started tenderizing my legs before the main course of the day. But the views of the lovely Eel River and heavily forested lands made it worth it. One of the frontage roads that would divert me from the freeway was closed, keeping me on the official route. It did have the benefit is shaving off some miles from my planned route.

It was here that I noticed I could not trust the elevation profiles that my navigation software generated, and that was a good thing. I planned my ride each day and made a GPX track and elevation profile for it. While I am happy to change my route on the fly, the courses give me a baseline to work from and know what to expect. When I first looked at the elevation profiles for the ride I was a little overwhelmed. Many days called for over 4000 feet of climbing, which is on the high side for me on my loaded touring bike. But when I looked closer I could see something was not right. The elevation profile was full of impossible spikes up and down. Passing over a very high bridge that day I discovered one of the reasons for this: the elevation profile did not recognize the bridge and showed the elevation as if the road went all the way down the huge valley and back up again. Elevation data was also thrown off by roads that ran along the top or bottom of a steep cliff, occasionally reading the elevation as though the road went up and down the cliff. So it was mystery solved, and I dreaded the climbing on the days ahead a little less.

The day was not without its tourist stops. Confusion Hill is a gravity gone wild kind of place. But I got there before they were open, which was fine by me. I did not need anything to make me any dizzier than the terrain doing already. I took a brief stop with good cell service and returned to the business at hand.

The little hamlet of Leggett was the namesake of the climb for the day and the last place I could get supplies, which meant carrying the extra weight of dinner over the hill. It was also the location of THE drive through tree, the Chandelier tree, which warranted a short side visit and a little messing around.

After getting my fill of tourism I was back on the road, and there was no avoiding it: Leggett was next. The hill is significant, and is really two hills that I will call Leggett major and Leggett minor. Major is first and bigger of the two. Leggett minor was shorter, but its grade was steeper and unrelenting. All the other cyclists I would talk to about the climbs agreed that the two hills were the about the same difficulty.

The road has a shoulder of varying width, not always a big enough for a touring bike. The scenery was a continuation of the redwoods, especially in the valley between the two climbs.

The transition to the rugged Pacific coastline was sudden and dramatic. The coast was drenched in sun, but the pounding waves were sending up a mist into the air, giving it a surreal look after days of clear air inland with the Big Trees.

The campground I stayed at, Westwood Union, was quiet on a Monday. I was the only one there on a clear bluff of treeless campsites overlooking the ocean. Hours later a lone RV joined me. None of the other riders I had hoped would be there showed up. It remote: water spicket, pit toilet only, and almost no cell service. I looked forward to my hotel stay in Mendocino even more and made due with water I heated up myself in lieu of a shower. The coastal wind was not what I expected or what was forecast. It was a heavy ocean breeze from the southwest following the common pattern of shifting direction late in the day. I fully staked and guyed out my tent just in case. And the wind died down in the evening as usual. After a day of big climbs and with the sound of the crashing surf below, I slept well on the bluffs above the Pacific. 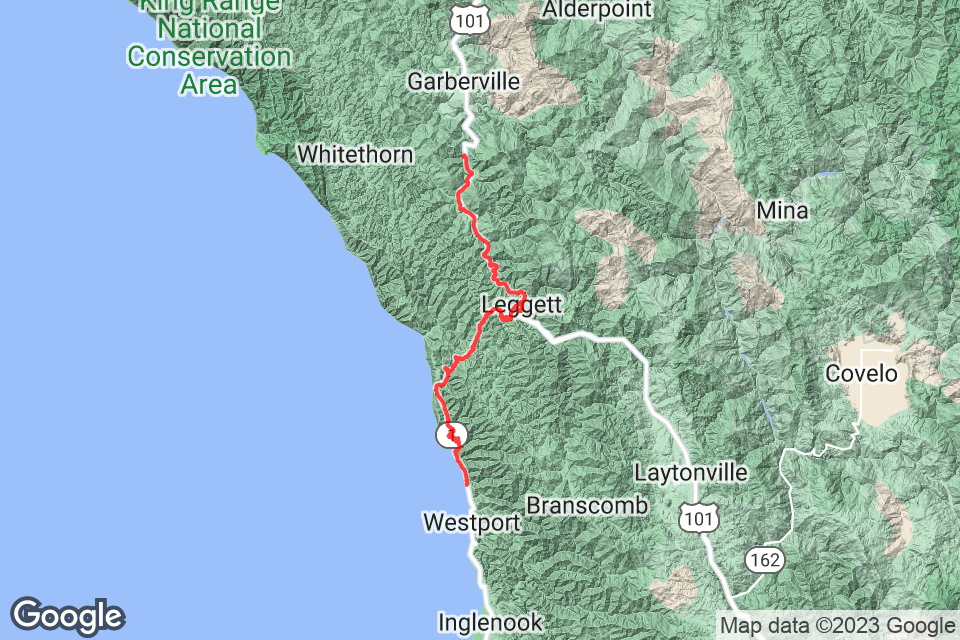