Cycle Tour Morro Strand to Santa Maria: From The Beach To The Farm

Day 5 of my 8 day tour would be a long ride through a wide variety of California terrain, but it started with me fixing my kitchen.  Quick backstory: I thought my fuel canister and was empty after very little use, so I pitched it and bought a new one. I was pretty excited about cooking bacon for breakfast and I set up the stove with a new full canister. But to my dismay I still got no flame. There was not much that could go wrong with my simple little titanium camping stove. After turning it on and off a few times I blew air through the small tube that goes from the canister to the stove. That fixed it. The canister that I threw away probably still had a lot of fuel left. More on my stove when I review it in a separate blog, but I was able to forgive it and I still give it a thumbs up.

The bacon cooked up fine once I got my stove working again.

As I was breaking camp I met Colette who was car camping next to me. And by car camping, I mean sleeping in her Honda Civic. She was a wonderful woman who had a heavy French accent even after living in the USA for 45 years. She adventured a lot and often alone.

She shared a great story with me: she had a daughter who never called (nope, I have never heard that one before). One of the few times she did call was while Colette was out adventuring. Colette came home to find police all around her property, investigating the missing persons report that her daughter had filed on Colette when she could not reach her mother. Her daughter had panicked and presumed the worst. It only showed how little she knew about how her mother lived. I was not sure if the story was a comedy or tragedy, but Colette told it well.

And before I could ask her, Colette said she thought it was silly that women were so afraid of travel and adventuring alone. She had done it all her life and had only one incident where she thought someone was following her, but she wasn’t sure and nothing came of it.

Colette was a seasoned adventurer and a great storyteller.

I finished packing and took some time to explore the beach were I was camping. It was a mix of sandy bluffs, rugged ground cover and shifting wetlands. It was very photogenic under the morning clouds. I returned to my bike, brushed off the sand and started my ride on the dedicated bike trails around Morro Bay.

The beach that I was camping on was a complex, beautiful dune ecosystem

A view back where I had ridden the day before.

My home for a day: RVs and the neighborhood that overlooked the campground and beach.

There was a fairly extensive network of trails in the area.

I followed the official Pacific Coast Route. From Morro Bay it turned inland and became a divided highway. Even the most scenic route can’t avoid some amount of highway riding. The steady uphill grade went on for miles and ended in the beautiful town of San Luis Obispo. I stopped for a coffee in a cute business district.

I chose to get a coffee at from those other guys.

San Luis Obispo is referred to as SLO, and has a charm all its own.

After SLO I rode back to the coast, sort of by surprise, I had not looked at my route that much and was not expecting any ocean views. The greater Pismo Beach area is a classic eclectic group of beach towns and the ride through them was fun and easy. The downtown pier area was under construction while I was there. I wound my way through it and across Pismo Creek, which formed a wetlands in the middle of town.

The coast along Pismo Beach had a little of everything, including suburbia with a view.

The coast wraps around to form San Luis Obispo Bay.

Pismo Creek meanders through town, creating a coastal wetlands that the area has grown up around.

Next is a route recommendation for Pacific Coast Route riders.  As you leave Pismo Beach and ride through Arroyo Grande, stay on the marked route.  There is a sign that points you down Halcyon Road as an alternate route.  It cuts a corner off the route and saves you some distance so it is very tempting. Halcyon looks great at first but it ends with no shoulder, very steep, and very busy. I have taken that cut off twice now due to that sign, and I think it is a bad idea.

Resist the temptation to cut a corner on Halcyon Road.

But I survived Halcyon Road and the rest of the day was farm country roads. I shared the road with huge farm trucks, slow tractors and clumps of dirt  while negotiating small shoulders and rough pavement. The scenery was classic rural farmland with open fields, storage silos, heavy farming equipment and the like. It was an abrupt change from previous days’ riding along the coast.

My ride that day ended in Santa Maria.  It is the big city in a farming area, so it reminded me of where I grew up. I stopped for supplies and made my way to the hotel I where would be stay that night, the only night I would spend at a hotel during my 8 day tour. I could not believe how happy I was to see it, I was ready for a little extra comfort that night.

When I called ahead to make reservations, the concierge assured me that it was okay to bring my bike right into the hotel and into my room. They said they got a lot of cyclists there that were riding the coastal route. I could see why: the nearest campground is pretty far away in Lompoc and did not fit my schedule. The Radisson is only a few bucks more than the bargain motels, so I splurged. I was happy I did.

The Radisson Santa Maria was a sight for sore eyes. And sore butt, legs, back, etc. I may have cried a little when I pulled in.

Not the usual place to park my bike, but the hotel was good with it.

I ate dinner at the nicer restaurant at the hotel with white tablecloths and everything. Such decadence! I would be back to camping and cooking soon enough. Pampering myself for a night was a wonderful change of pace and recharged me for the rest of the ride. I concluded that when I do a multi-week tour someday I will stay at hotels one or two nights a week.

I think there was chicken somewhere under all that deep-fried goodness. When in farm country, eat comfort food, I say. I had enough leftovers for breakfast, and the room had a fridge and microwave.

The hotel serves the airport. It is next to the tarmac and I had a view of it from my table at dinner. There was zero activity while I was there, however.

I cleaned myself and my clothes thoroughly, using the sink and tub to clean my clothes. I hung everything all over the room to dry, feeling confident they would actually get really dry that night after so many nights outside in foggy damp conditions. I must have been in “roughing it” mode, I never even thought of using the laundry at the hotel. I put all of my electronics on real wall chargers too, another luxury. And as I did on most nights, I fell asleep quickly, early and well, ready to continue my ride into Southern California wine country the next day. 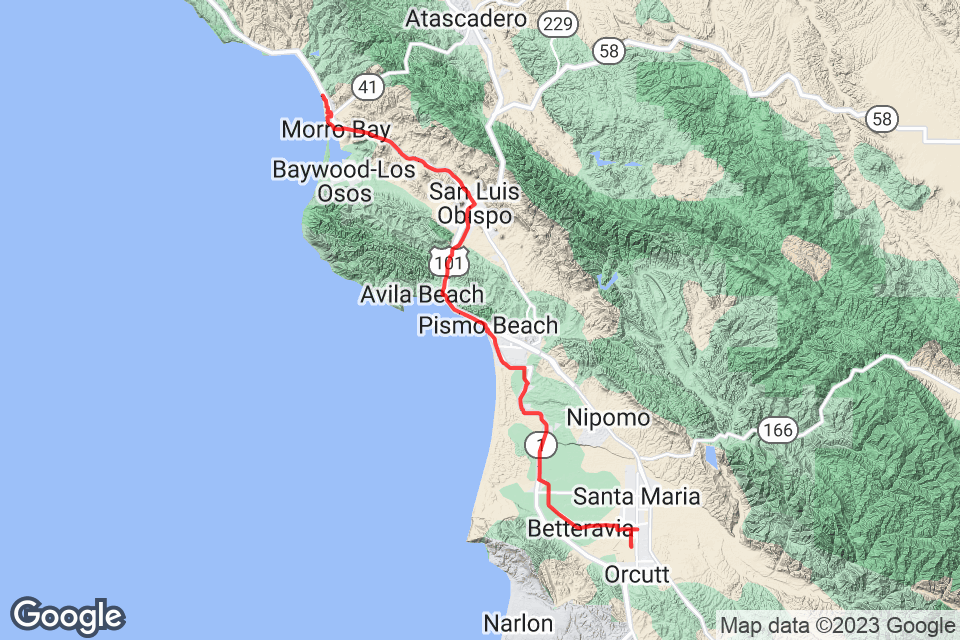