Attack of the tumbleweeds

If you have followed my ride reports you may have noticed that I have done a similar loop lately, changing the route a little every time. Today’s change was that I did the loop in reverse, eliminated some climbs and did more mileage instead. 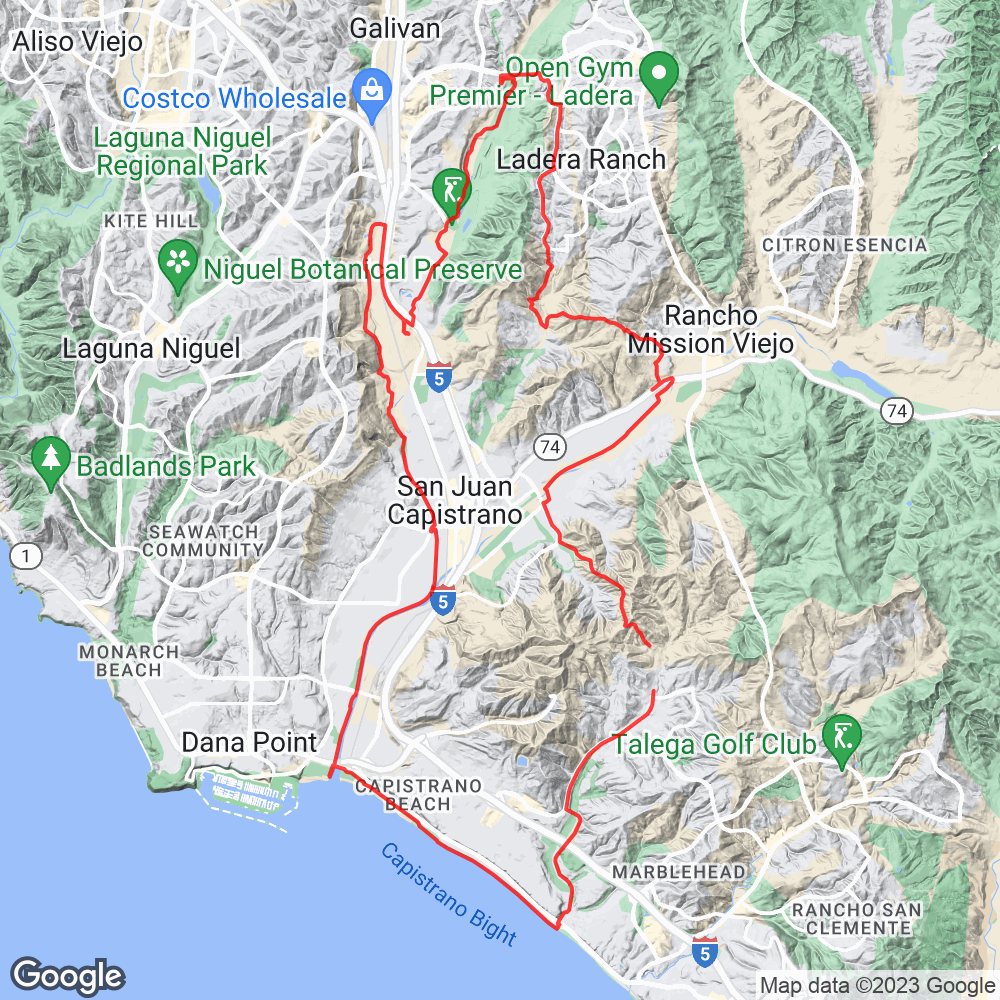 The first thing I met of any significance was of GREAT significance. San Juan Capistrano has extended the bike trail from Reata Park all the way to Calle Arroyo, which means cyclists do not have to brave the “Ortega choke point” anymore.

A trail to allow cyclists to avoid the Ortega choke point

Ahh, the smell of a new trail

The Crown Valley bridge over Arroyo Trabuco actually has some nice architecture to it and affords a good view of the valley it crosses as long as you are on a bike or on foot and able to see it. The view from the cars is not so interesting.

Do you people know what an interesting bridge you are on?

‘splain dis to me homey

One of these days I want to visit that winery.

The winery is at one end of my short trek down Camino Capistrano. I stopped for a break in the open space area.

Due to sufficient rain this year the local vegetation is turning green. It is a nice change.

I got a cheap grip/bar end combo from a Chinese seller on Amazon. The bar ends had a small burr under the finish and the left grip rotates slightly even when tightened properly. In practice I did not notice either problem while riding, and I do like the bar ends. I was in them most of the ride. The red Togs (thumb over grip system) works well. Between the two of them I have multiple additional hand positions on a simple flat bar. FYI, the Truvativ T40 Noir carbon flat bar comes with plugs that are aluminum inserts to support lock on grips and bar ends.

The other end of my ride down Camino Capistrano was Saddleback Church. The campus is really beautiful featuring a pond, a chapel and buildings that look like they were inspired by the missions. I will have to take pics of them on a future ride.

Once past the church you enter the San Juan Creek area.

This place was green before green was cool

The area is full of remnants of an Orange grove and who knows what else. I mean someone probably does know, just not me. Like this thing, a large concrete bowl that won’t be hanging on much longer.

I hope this is not important to anyone

Or a semi trailer that probably can only be removed by a helicopter lift.

Free to a good home

Or this poor nursery which I have taken pics of before.

And the occasional unexpected amazing view. Well, it would be unexpected if you had not seen it in a blog already.

A wild canyon hiding in plain sight in suburbia

This area is not popular among mountain bikers. It is mostly fire road, not singletrack, so mountain bikers find it boring. I have seen very few mountain bikers back here. But I have seen many more equestrians. Like the two I encountered on this ride. Sorry, I did not get pictures but I wanted to describe what happened with them. I have had many riders on horses tell me that there is no need to stop for horses in an area like this. Riders should not be riding horses on multi use trails that get spooked by bikes. But I am still accommodating of riders. I slow down, make eye contact and try to get some kind of gesture that it is OK. Then I ride by, slowing down if I need to. When you ride as slow as I do, slowing down is not always necessary. On this ride I encountered a horse that got spooked by me from a long way off. I stopped and waited for the rider to go by. He brought the horse a little closer to me as he rode by, I presume to get the horse comfortable with bikes. The rider even explained in passing that the horse never got spooked by bikes. I have to presume it was my 29 plus tires. They have the same effect on roadies.

That raised my sensitivity to horses. Just minutes afterward  I was riding a long shallow descent and flying along the trail nicely. A tree blocked my view past a sharp turn, but looking through the tree I was able to see another horse rider coming up the trail. I slowed down and the rider pulled the horse to the side of the trail. This rider had nothing to say, but I always complement the horse as I ride by,”beautiful horse!” Riders seem to universally appreciate it. And I mean it, too. It is sort of like saying “Nice hawg” to a Harley rider. It is a good way to break the ice and maintain good relations with other trail users.

The trail continued down to the beach. The tide was very low at the time. My 29 plus bike is actually a fat bike with 29 plus wheels and tires, so I am familiar with riding beach sand. I broke off the trail and hit the sand. The plus tires were fine in sand like this. They tended to sink in a little more than the my 4.7″ Big Fat Larrys of course, so they were a little more effort in the sand, but manageable.

My Fatback, at home on beach sand, even with puny little 29 plus 3.0 tires

A low tide usually means a high tide, and a recent high tide took out part of the parking lot at the beach.

No parking. Seriously. No. Parking.

Farther down the beach there was a strange visitor.

A little bit of a disappointment

I left the beach via a railroad underpass.

The final leg of the ride took me under the 5 freeway which is being widened. While under construction it looks like the entire thing is being held up by exclusively by wooden supports. It was a fitting end to ride the featured new trails, a new direction and new ends.