A Morning With Big Sur PCH All To Ourselves

Panoramas With a Chance of Heat Exhaustion

I have been off the bike a while due to an infection (I prefer to skip the details about that, thank you), a twisted ankle, work schedule, wah, wah, wah, I know. So when I was finally able to get back on the bike I did what I usually do. I go too big rather than take it easy. I got so excited I didn’t sleep well, I didn’t check the weather forecast or other small details I normally do. It all just adds to the adventure I guess. By the end of the day, the route I rode was not what I had planned. BTW, I don’t know what is up with the Elapsed Time number, Strava is messed up. 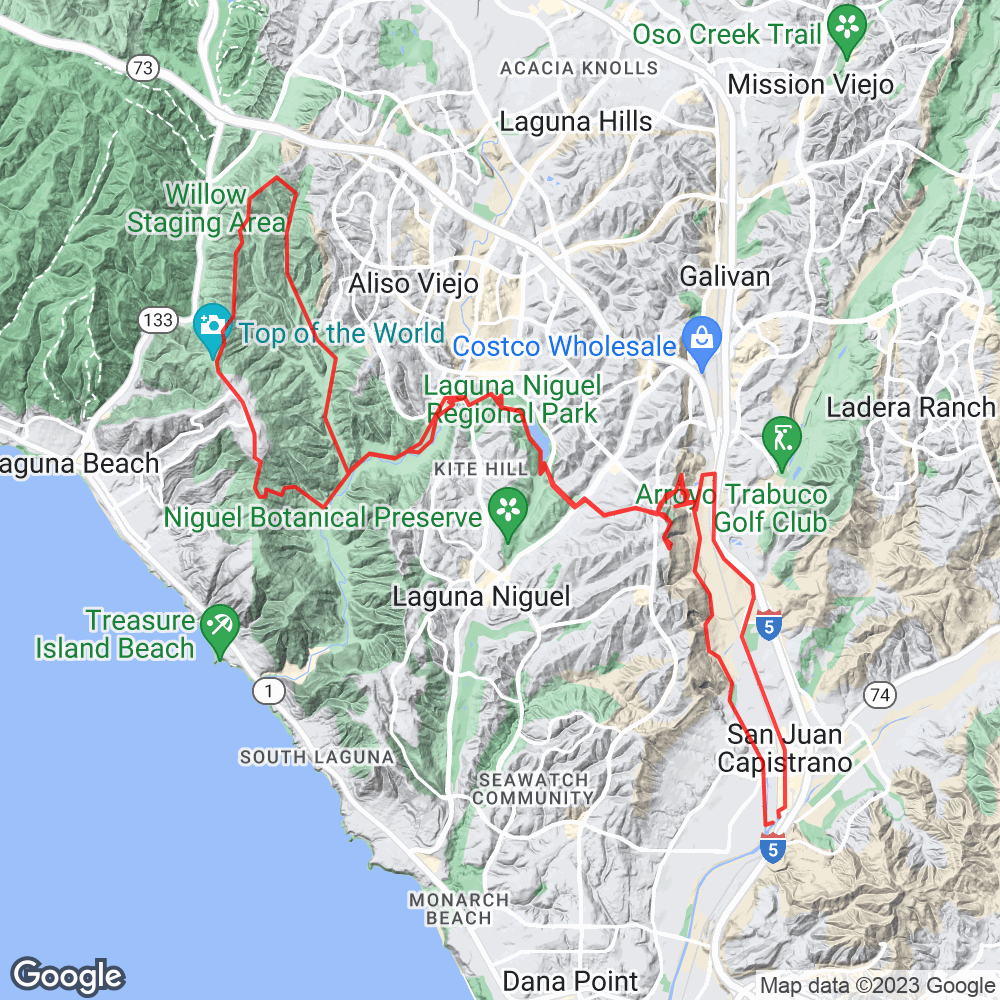 The day did not start off well. My fat bike/29 plus had one of its bottom bracket bearings seize up. This is not as terrible as it sounds. I ride my fat bike on ocean beaches. I have managed to beat back the effects of corrosion with all kinds of tricks, but my drive side BB bearings still live short lives. So I have a few cheap BBs around (expensive ones die just as fast, sadly), and I have gotten good at replacing them. 15 minute delay and I was out the door. The morning was sunny and cool and did not give any hint of the wave of heat that was to come.

I returned to a canyon that has no name I can find on a map, so I will call it Oso Creek Canyon, it is a network of trails that is more popular among equestrians than mountain bikers, but I find it perfect for my rigid 29 plus. The riding is not technical and the horses have turned some sections into deep, loose soil, but my plus tires negotiate it with no problem. This time I climbed out of the canyon on a trail I have never tried before. It rose above the beautiful campus of Saddleback Church which is nested at the northern end of the riding area.

I love the contrast of the freeway and singletrack

Zig zagging my way up the canyon was not as difficult as I thought. Unfortunately the only descent I could find was along paved roads. Not the best reward for my singletrack climbing efforts, but I hope to fine tune the route now that I have ridden it.

I am very familiar with Aliso Woods and put in a big loop of the park. Someone has made a Strava segment of the route all the way from the parking lot to Top Of The World, the highest point in the park. It is a Cat 3 climb, which was surprising: that is bigger than I would have categorized it. The air quality was exceptional, affording awesome views in every direction.

A great view all the way to Saddleback Peak

I personally do not have a problem with the discomfort of riding in the heat. But it would seem there can be a big discrepancy between your perception of something and your body’s reaction to it. While I personally felt invigorated by all the sunshine and warmth, my body was shutting down, and it took a while before I realized what was happening and tied the two together and ultimately did something about it. Weird, huh?

As I was making my way up this Cat 3 climb, I was doing what I have been doing more of lately, and that is watching my heart rate. I have been trying to ride more of the time in an aerobic zone so I burn more fat and my body will start to produce more power in that range. That means dropping my pace to a boring level. It has been paying off, BTW. But in the heat that was just not happening. No matter how slow I went, my heart rate would not drop and I could not recover. I can just picture all of the people with medical backgrounds nodding their heads right now. I was making sure I was drinking a lot so as not to dehydrate, but that alone will not stop the heat exhaustion. I was getting slightly dizzy so I got extra cautious on technical sections, even walking a few of the tough sections. I found a picnic table in the shade and managed a power nap and food, even though I did not want to eat. I woke up to a reduced heart rate, but it raced up again as soon as I started riding again. Fortunately I found some entertaining scenery along the way.

My brain became so disconnected that I crossed an intersection against a red light directly in front of a car stopped at the intersection. I looked at the light in the wrong direction, made eye contact with the driver and proceeded straight in front of them. I am guessing I looked like hell because the driver cut me a lot of slack and even gave me a very polite warning with a couple of taps on the horn. It was not until I was across the intersection that I realized what had happened. It was quite the wake up call. I proceeded with even greater caution at that point, but my climbing was not done.

My kind of gate. Open.

My plan was to continue my climb around the Oso Creek Canyon along Bluff Trail (that is what Google calls it anyway). I know my brain was still on the fritz because I was still waiting for a second wind and recovery. In retrospect that was just not going to happen. The temps were not going down and neither was my heart rate. I finally got to a point along the ridge where a sustained cool breeze helped me recover a bit. A bit farther along I got a good view of the burn area from a recent fire in the canyon.

The cool breeze must have worked because I finally realized that I needed to bail and end the ride ASAP. The bouts of tunnel vision also clued me in. The bluff trail was proving to be a major effort so I turned back. Even the fastest way out included a small climb in the direct sun that I managed to push up. From there on it was mostly downhill and fast pavement. By the time I returned to my car I was feeling a little better. I forced more fluids and managed to eat something, went home and slept and fought off minor stomach irritation. I was probably closer to a serious bout of heat exhaustion than I realized. All in all it ended fine and was a learning experience. You cannot rely on your own judgement in a situation like this because you are impaired.

I can’t wait to do it again.