The Math Behind A Wide Range 2×11 Drivetrain

After The Rain Comes Sun

The last few weeks have brought a series of badly timed rainstorms to southern California. Don’t get me wrong: we need the rain. We need it epic bad. But the pesky storms have been blowing through on the weekends. And while rides were possible, they had to timed just right to avoid the rain, or you had to be out in the rain. I did my fair share of rainy rides, mostly on the road. Off road riding options get very limited during the rain. Most wilderness areas around here close during and after the rain for a few days, and for good reason.

For those of you not familiar with our soil here, it is mainly some combination of three things: clay, sand, rocks, and clay. And a little extra clay thrown in for good measure. Forget loam, it ain’t happening. The Loam Ranger is a frustrated rider in these parts. If you have never had the experience of riding in wet clay, count yourself lucky. The clay we have is like cement that sets the moment it hits your tires. With each rotation of your tire the clay ads another generous layer on top of the last layer, which has not gone anywhere, thank you very much. Obviously this can only go on for a couple of tire rotations, then the stuff packs out to your stays and refuses to come off. And you stop. Not just because your tires weigh 50 pounds, which they do. You stop because your spokes all snap, your rim tacos, and your nipples explode. On your wheels, too. And if you look behind you at your tracks, you will see a trail that is damaged because you just sucked a giant deep track of clay out of it and messed it up bad, possibly for the rest of the season. To add insult to injury, clay is largely waterproof. Water does not seep through it into the ground. It stays on the surface. If a grade does not allow the it to drain off, the water just stays there and laughs at you until evaporation finally gets rid of it. So it takes a couple of days after the rain stops until trails can be ridden without damage again.

And that is where this ride comes in. The rains had finally subsided for long enough for the clay to dry out, wilderness areas reopened, the sun came out, the winds mostly died, and it was back to California weather as usual. Except for all this weird wet stuff everywhere:

My ride had me crossing streams like this all day. They are not as scary as they might seem to the uninitiated, I got better at reading them as the day went on. Speaking of the route here it is: 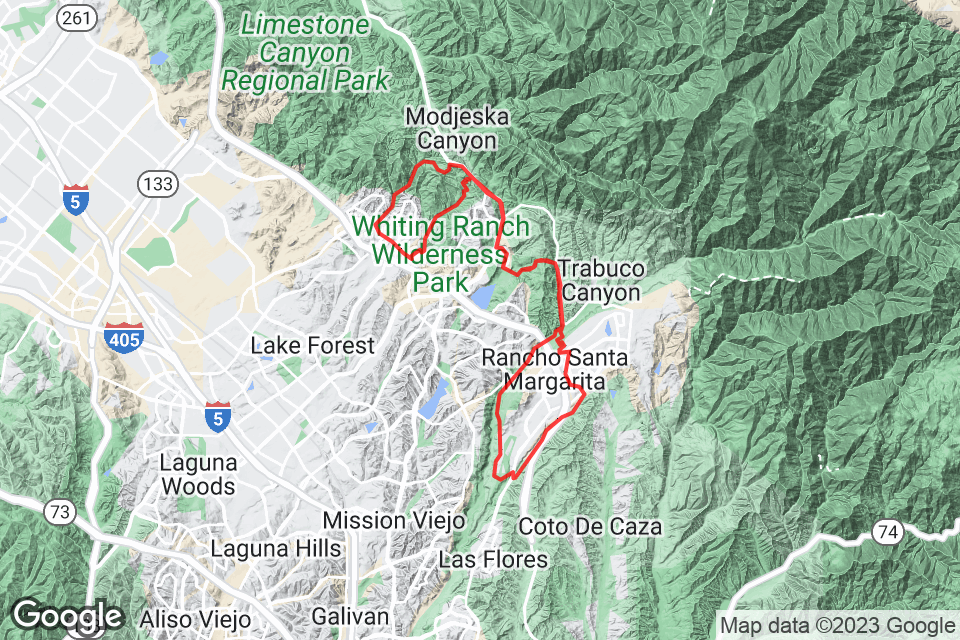 I signed up for a web site called “relive.cc”. They make these cool animations of your rides. Check it out, I am pretty stoked about getting these. I don’t know if they will stay up forever or if they will have to include advertising in the future, and all the usual concerns you have over cool new free web sites:

The ride started right off with a taste of what I was to see all day: ruts. Big ones, little ones, ruts with water, ruts with rocks, unpredictable ruts that zig zagged everywhere. Still better than the best day at work, but…ruts.

The rain brought green to southern California almost instantly. And lots of it. The drought has been going on so long I had forgotten what was supposed to be green and how wonderful the landscape looked with it. I had begun to accept that year round brown and gray was the norm. Heck, there is even water in the reservoir.

I stood on this ridge for a long time watching a huge vulture glide all over the place without flapping its wings once. It started below me, which is always amazing to me: watching a bird fly from above the bird. Sorry, no vulture pic. It was enormous, black, oddly graceful and butt ugly. There, you don’t need a pic of the bird now.

After watching the vulture from above, it was time to drop into this, which was even more fun than it looks.

For every fun drop in, there is an equal and opposite climb (shuttling excepted). Actually, no scratch that. Newton’s laws do not apply here. You descend fast and climb slow, so the climb is not equal and opposite. It just ain’t fair.

The climb up Borrego Canyon Trail and Mustard Road (below) was changed dramatically by the rain. It parallels a riparian stream most of the way. Obviously, the stream had water flowing down it on this ride. It had changed course, overflowed, and carried away topsoil all over the place. In a few places the stream ran down the middle of the trail. In other places it deposited deep sand across the trail. In still others it created ruts that were up to 5 feet deep. I don’t think they call them ruts anymore when they get that big, do they?

The climb up Mustard Road ends with an unrelenting 9-15% grade from hell shown in this pic below. It may not look that steep in the pic, but it is, take my word for it.

I headed back to the start, passing again through O’Neill Regional Park, and I came upon a photo shoot. So what did I do? I did a photo shoot of the photo shoot, of course. You see some of the most unexpected things in the wilderness sometimes:

The erosion from the rain did a lot of strange things, but none of them topped this. This rock flow used to be a smooth fast fire road. Clearly the rain had flowed straight down the road and washed away the top soil, leaving just the rock foundation. It was like having x ray vision. But bumpier. This must be how they make dirt roads so they have decent drainage in spite of our clay soil. It works great until it rains too much. I expect it will be repaired soon.

I treated myself to some Mexican food at Casa Ranchero in Ladera Ranch. I have heard it is important to get protein right after a big ride. What better way to get protein than at a Mexican restaurant, right? I highly recommend this place. I had the best beef taco in a combination I have ever had. And I have had a few. And the service was great. The free wi fi did not work though. But when you have a beef taco that good, who cares?