Day three of my tour would be a relatively short ride from Monterey to Pfeiffer Big Sur State Park. I liked that it would be a short ride so it would give me time to take lots of pictures of this very scenic area.

I got a late start due to all of my fraternizing with fellow riders at Veteran’s Park in Monterey. The ride into the park the night before was a nasty climb to the top of a hill. But the ride out of the park and back to Pacific Coast Highway (PCH) still managed to offer more climbing. I had skipped the scenic 17 Mile Drive the day before, but I did ride the last few miles of it that morning. It was not a classic coastal section, but it was as scenic as I remember it.

The two banana breakfast I had  at the campground was not going to sustain me for long. I stopped early in the day at the last plaza to offer any services until I would arrive in Big Sur later in the day.  I stop there on every trip I take in that direction no matter my mode of travel, be it by car, motorcycle or bicycle. The road around it was under construction and it made ingress and egress by bike a little interesting. I found a cute place for breakfast where the host seated me near an outlet so I could charge all of my accessories while I ate. The solar panel I brought was not helping much in the heavy cloud cover along the coast.

Café Stravaganza served up a wonderful and welcome hot breakfast, which was a nice upgrade from two bananas, to say the least.

The useless solar panels made me realize that I had had a change in my attitude about weather. My mood used to depend on it. If I did not get sunny, calm, temperate weather, I was disappointed. But on this trip I ran into a lot of cloudy damp weather, albeit no rain. And it did not put a damper on my spirits (pun intended). It was a very liberating change.

The local Post Office was close by and I stopped to ship back extra items that I did not need, including my CPAP machine and an extra water bottle mount. You can read about the dramas associated with each of those items in earlier blogs. After a quick stop at a market I continued south. Leaving that plaza is always a bit dramatic for me. I consider it an outpost, a last bastion of civilization, the beginning of the rugged section of Big Sur, even though you are still in Carmel for a short while and there are  good places to get supplies along the coast.

This beach was the last one I would see.  After this point I steadily climbed high above the ocean and the coastline became very rocky.

Peering through the trees, I could see that this cove is circled by beautiful homes set among the rocky cliffs.

PCH south of Carmel had less room on the road for bikes than I remember from my last trip. There are signs labeling the road as a bike route. And California has a relatively new law requiring motorists to give cyclists a minimum of 3 feet as they pass. But I think most people are unaware of the law. And it only helps so much on PCH. The law does not allow drivers to cross the double yellow line to give cyclists that space, but instead instructs drivers to slow down. On much of the coast there is no room to give cyclists that much space in the lane, there is nearly always a double yellow line, and almost no one slows down. So it was pretty much business as usual dicing it up with cars.

Traffic was light, but I had hoped that the closure on PCH farther to the south would reduce traffic more than it did. The number of cars did taper off as I went, and I was thankful for it. By traveling before Memorial Day, the number of large recreational vehicles (RVs) was also very low. RVs on that road can be pretty exciting as a cyclist.

The vistas grew as I continued along the Big Sur coast.

Fishing boats like the one on the left made their way along the rugged coastal shore.

Inlets like this were from streams and canyons that formed in the coastal hills and spilled out into the ocean.

A look at the coast ahead.

The iconic Bixby Creek Bridge. If there is one landmark that represents the Big Sur coast, this would be it. There are others tied for second place, all very close.

My bike needed a rest after all of the rolling hills of PCH.

I have traveled this coast many times by car, motorcycle and bicycle. It has been captured countless times in photographs and every conceivable artistic media. As I traveled along the road I got the surreal feeling of moving through a living painting or sculpture, becoming part of a piece of art myself. I imagined the hills rendered in brush strokes, the road portrayed in stippling, or the ocean as a large glass sculpture. I pictured myself from the third person, portrayed in the same media as my surroundings, the structure of bridges becoming rough welded brass, captured in perfectly lit black and white photography, or made abstract  in water-color. I have never seen cyclists traveling this road rendered artistically: they are always portrayed with simple photographs. But there must be an art catalog of Big Sur cyclists somewhere.

The cows of Big Sur never cease to fascinate me. Of all the places for a cattle ranch, this has to be one of the most unlikely.

The hill that stands apart from the coast is Point Sur, home of a state park this is only open by guided tour, featuring a lighthouse and part of what used to be a naval station, though there is a small naval facility still there.

This is what I call the gateway to Big Sur from the north. PCH veers inland behind the first row of coastal mountains into the valley where Big Sur is nestled.

The Big Sur River follows along PCH for a long way. If you are driving or heading north you might miss it. Its clear waters are filtered by the rocks and soil and the trees crowding its banks make a cool breezy canopy on even the hottest of days.

Big Sur River Inn and the shops around it are the first services available after leaving Carmel. They have a general store where I stocked up on wine and other necessities.

The sign welcoming me to the campground where I would spend the night.

BIg Sur River winds its way through the campground, having recovered from years of drought followed by a year of flooding.

Not every picture taken in the Big Sur area a work of beauty! I made short work of the carnitas wrap from the inn. I usually take pictures of my meals before I start eating them. But this time my appetite got the best of me, so you get to enjoy this lovely image of half eaten wrap. It tells a story nonetheless.

The only other person in the Hike or Bike area was Shane. I had expected to meet fewer cyclists as I got closer to the PCH closure. Shane was going south and turning back. That was an option for him because he lived not far to the north so it was an out and back ride. When I think about living in an area that I find so special I have mixed feelings about it. Would easy access to great experiences turn the exotic into the mundane? Or would my life be elevated by often having this kind of experience? I expect the former, but given the chance I would take the risk that it would be the latter.

I could have spotted Shane as a serious, strong rider even without the yellow shorts. But those clinched it.

Shane was quiet but we talked more as we got settled in. He was a very fit rider traveling with a two-wheel utility trailer and wanted to get bags for his bike instead. He had a lot of equipment questions and I was happy to talk tech about our bikes and gear. My old titanium Airborne Carpe Diem bike and bikepacking style bags garner a lot of attention. I think they also give me some cred so people listen to my advice and usually ask more as I tell them more.

Shane was staying at the park for a couple of days which seemed like a good idea. Of all the places I might spend extra time on the ride, Big Sur would be on the top of my list, but tied with a few others. I was already beginning to plan a return trip to the coast now that I felt confident in my gear and ability to accommodate my sleep apnea.

Big Sur was thankfully a dry environment. The dampness of Monterey had much of my gear soaking wet. My tent dried out fast, I set up a clothes line and took care of other housekeeping.  My sleep kit and I were getting along well. I fell asleep early and slept hard and long, which I ended up doing pretty much every night of my ride. And that was good, because the next day’s ride to Kirk Creek Campground started with a relentless climb out of the valley. But more on that in the next blog. 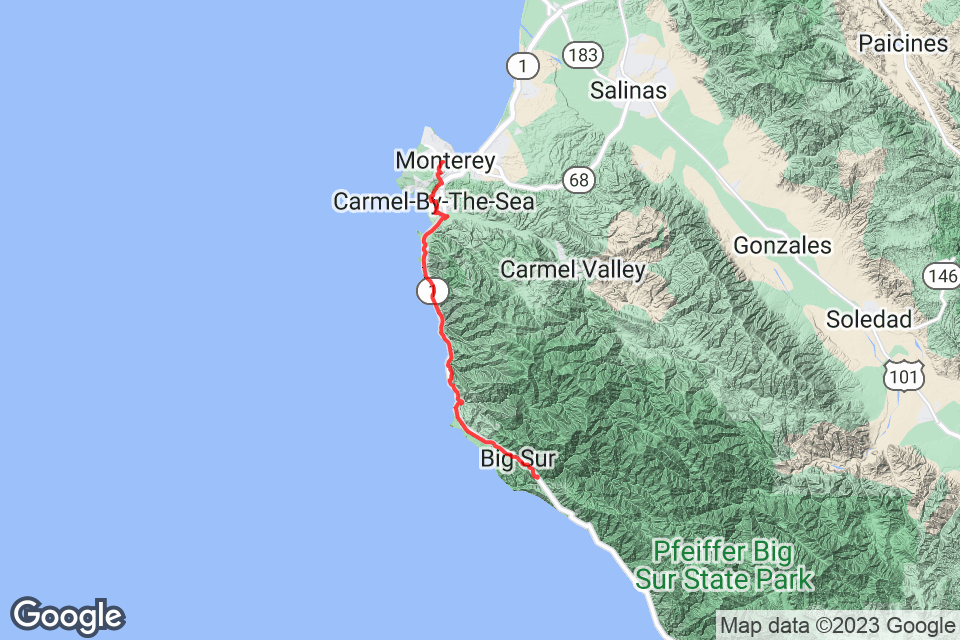