Day two of my trip began with my resolve that I would not put my head down and hammer out a fast ride, but instead take my time and stop to explore things that I saw along the way. My first chance to exercise that was only a few miles in as I passed Seacliff State Beach. It featured a pier with a sunken ship and the end. It is a concrete ship that its owners sunk at the end of the pier intentionally.

Stopping to have a look at the strange sunken ship and ride the bike trail at Seacliff State Beach.

The visitor center never opened while I was there, but it looked interesting and had a nice bike rack.

The trail followed the beach and had lots of picnic tables protected by awnings. I could not resist the chance to spend some time at one.

As I left the park I was joined by riders from an organized ride. I asked people what the name of the event was, but I could not understand what they were saying. It was the seven something ride maybe? I stayed with the ride for a long time. I was riding slower than everyone else and that gave me the chance to meet many of them.  A few recognized my bikepacking bags and touring set up and gave me a thumbs us or asked where I was going. Our paths finally diverged and I still had a lot of riding left.

I loved the contrast of the rural farmland with the exotic coast line with dunes and surf in the distance. My version of farmland comes from my days growing up in the Midwest with flatlands and crops as far as the eye could see in all directions. Seeing farmland on the coast with an ocean breeze blowing and set among a hilly landscape was a mix of worlds that did not seem to fit together, yet there they were. Seeing those worlds juxtaposed never stopped amazing me.

I originally had plans to make it to Cannery Row for lunch, but my stomach had very different ideas and I needed to eat way before that.  And the endless farmland offered little in the way of places to eat.

It is hard to make out in a picture, but the coastal dunes contrasted sharply with the farmland.

I gave in and stopped at the first fruit stand / gas station I saw. They had a small supply of a lot of things, as markets in the middle of nowhere often do, including enough for lunch. I refused to stand in the parking lot of a gas station and eat lunch, however. The nice woman at the counter told me there was a place with some picnic tables a few miles down the road.

I don’t know which place she was talking about because a few miles down the road was the lovely city of Moss Landing, and it offered many scenic spots to enjoy lunch. Highway 1 returned to the coast in this area with an ecosystem called a slough. Like some sort of coastal swamp, it is a delightful meeting of sand dunes, ocean surf, inland waterways, unique foliage, and marine mammals. It has its very own distinct exotic beauty among the many places I saw on my ride. I found a place near a marina to pull over and eat lunch.

It was not the gourmet lunch I had planned, but I made changes to allow me to appreciate the places I came upon unexpectedly.

From Moss Landing the bike route turned  inland again and the coastal winds picked up. Sometimes a little in my favor, sometimes a bit of a headwind, they were nearly always from the side. And when the route turned directly into them my pace slowed down quite a bit, but thankfully that did not happen much. The route into Monterey turned into a dedicated bike path starting way outside of town, seemingly in the middle of nowhere, which was impressive and wonderful to ride.

The bike route appeared unexpectedly in the middle of farm country and appeared to go nowhere and not be used by anyone.

A closer look at the wind-swept areas of sand revealed that the trail had many users, even recently.

The route into Monterey continued on a bike path and offered delightful views of the shifting coastal dunes and delicate ecosystem. That is Monterey Bay in the distance.

The bike trail crests the dunes north of Monterey, affording big views of the coast and the bay.

The colors of the plants, the sand, the ocean and the sky are a characteristic of this area. And the coastal winds were literally in my face as I took it all in.

The path turned from a remote coastal route into heavily traveled urban trail pretty suddenly. And what a great route it was. It took me past all the main sights you might want to see in Monterey along the coast including Cannery Row, the Monterey Bay Aquarium and, of course Light and Motion bicycle lighting company. I received no promotional fees for this blog. But I would not object to it if I did.

I have been to this aquarium many times. It alone is worth the visit to Monterey.

I decided not to cook and I had a hankering for a big deli sandwich. After searching for delis I decided on International Deli in Monterey. When I got there I discovered it was an Iraqi deli, not the sandwich kind of deli I had in mind, but it had good reviews and looked wonderful so I rolled with it. I ordered the chicken shawarma because it looked great. I could not help but laugh to myself about feeling like Ironman.  I hate it when people make movie references I don’t know, so search for Avengers shawarma if you need to.  Once again I had crammed too much in the day so I decided to trim the 17 mile drive from my schedule.  I packed my shawarma away and made the big climb to Veteran’s Park so I could enjoy it at my campsite.  If you do the ride, make sure you fit the 17 mile drive into your schedule. I have seen it before so I was OK.

When I got  to the campground I saw lots of biker tents but no bikers. Some tents did have bikes next to them. It looked creepily abandoned. “Are they all homeless?” I mused to myself, but I knew better. I set up camp and enjoyed the chicken shawarma. I had asked for some extra veggies and they had obliged. Even though it had gotten tossed around a lot on the way to the campground, it was still wonderful.

I had about as much energy as the Avengers did when they ate their shawarma.

I settled in and it got dark early in the heavy overcast weather. The only lights I traveled with were a headlamp and the light on my phone. The headlamp had an unexpected effect. If you look into the woods as you are walking in the dark, the eyes of any critters looking at you shine back at you eerily. But, being critters, they don’t realize this and think they are being super stealthy and you can’t see them.  While walking to the showers after dark I had a creature of unknown species following me with its gaze for a while. It made me uncomfortable and I even tried to shoo it away. After amusing myself with a series of strange noises, it turns out the good old raspberry noise finally vexed whatever was stalking me and it scampered away.

I fell asleep hard before 9 pm. I heard some bikers arrive later and once again my eye mask and earplugs were very helpful. I was hoping to meet them in the morning.

I awoke well rested and realized I was sleeping well with my CPAP substitute breathing aids. This was a great development. I was concerned that I would not be able to sleep well with them and I might even have to cut my ride short. But that morning I committed to completing the ride as planned.

It was damp and cold: so damp it looked like it may have rained in the night, but if it did the noise of the rain on the tent was not enough to wake me. It always amazes how warm a tent will keep you given that it is only a couple of thin sheets of nylon. And my tent was a lightweight model with very thin nylon and it still kept me very cozy. I stayed in the protection of my vestibule to make myself a cup of coffee while the morning fog cleared up.

There is nothing like enjoying a hot coffee  sheltered by your vestibule. Bananas make a great culinary pairing too, BTW

All of us cyclists eventually came out of our tents to say hello. Alex was riding around the PCH closure via a route that included King City. I couldn’t talk him into splitting the shuttle around the mud slide with me. I later encountered him on Facebook. He continued to ride long after my one week trip had ended and he was posting real-time updates.

Michael was an eBike enthusiast and semi vagabond in my own words. He was touring on a utility bike that was his own custom eBike creation. I had experimented with making eBikes a long time ago. I was surprised how literate I still was. Mike and I talked a long time about the state of eBikes. When I told him that I was sleeping consistently without my CPAP machine, he gave me idea to ship the CPAP back home. I would have probably figured it out myself, but he probably saved me a couple of days of hauling it around.

Thaddeus, a total vagabond by his own admission, also joined us but declined to have his pic taken. I was not sure if Thaddeus was a nickname or not, but his off the grid lifestyle was fascinating. Tim the park ranger checked in trying to figure out who did not pay their $6 camp fee.

Alex was opting to take the inland route around the PCH closure.

Michael was touring on an eBike, something I have thought about doing, and I have built a similar cargo eBike, so we had a lot to talk about.

I had to tear myself away from the great conversation if I hoped to have a relaxed ride to Big Sur. I talked as I packed and wished everyone well as the conversations continued. Damp fog had given way to low clouds and it looked like a great day for a ride. 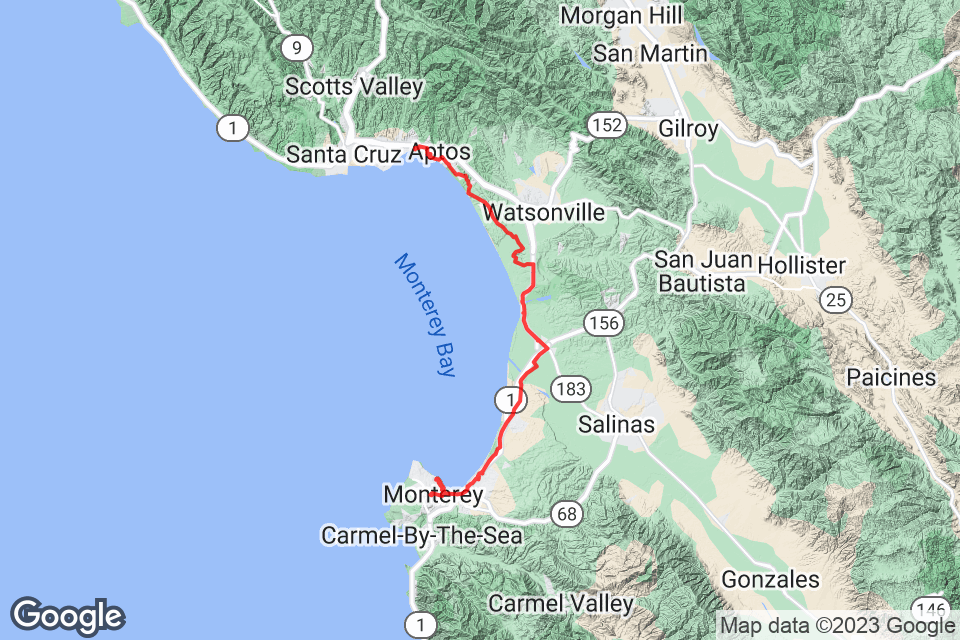