I like to call my fat bike a surf bike. It is not a perfect name, but it conveys what I like to do with it, which is ride on beach sand. A properly set up fat bike can ride along the beach all day in the right conditions. What are the right conditions? One factor is the kind of sand. Sand that is too coarse or gravelly is no good: you sink into it no matter what. The finer the sand the better. Another condition is the wetness of the sand. If you cannot walk or run on the sand long, you cannot ride on it long either. People who run along the beach are good examples of what you want for fat bike conditions. They run on the wet sand just beyond the reach of the waves. If you ride along the ocean, the last condition is the tide. You want to ride on a low tide, or at least a falling tide well after high tide. At high tide  or during a rising tide the rideable wet strip has waves crashing on it all the time. The timing of  these conditions not been good for the last year or so. Good low tide conditions have been occurring at night and/or on week days. But now there are good fat bike beach conditions forecast every two weeks for many months. Consulting the tide report is very important when planning a surf bike ride.

The bikes that surfers ride might better be called surf bikes. Many surfers have beater bikes with surf board racks, and  they walk them out onto the sand to go surfing. There is also the recent trend of eBikes with fat tires that you might call a surf bike.  Surfers cans save their energy for surfing and they don’t have to push them across the sand. Fat eBikes outnumber human-powered fat bikes around here by a wide margin when you count those that are ridden by non surfers on the bike trails and streets. I would not consider those to be surf bikes, but they would probably get lumped into the category, if it actually existed.

But whatever you call it, I rode the fatty along a route that I have been riding on my gravel bike lately, but threw in some beach sand. At least that was the plan. 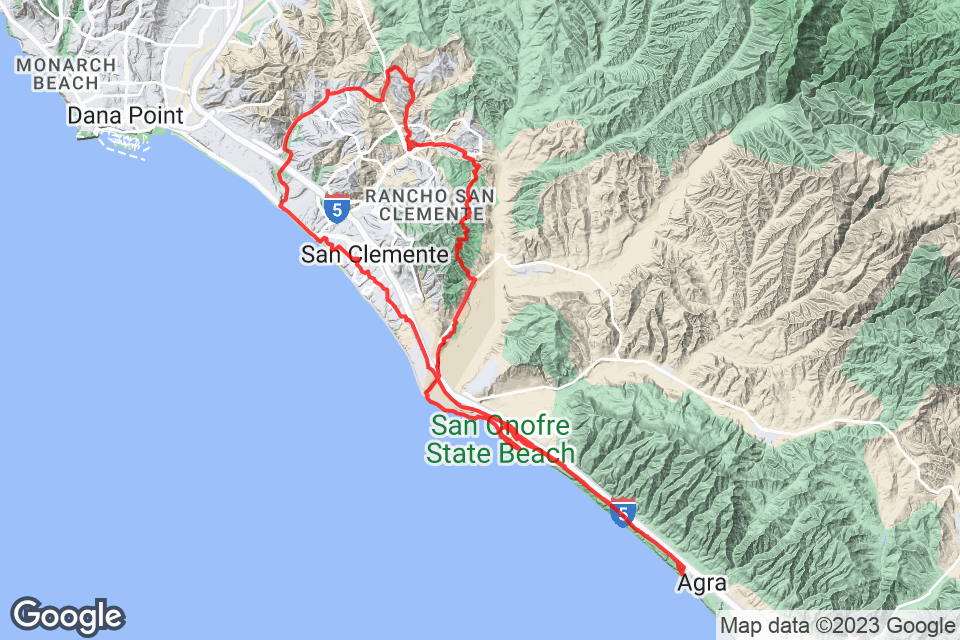 I started with the big climb needed to get access to dirt trails where I live. My route took me past the amazing pedestrian/bike bridge that spans a new street. The bridge does not carry vehicle traffic: there are only hiking/biking dirt paths leading away from either end of it. But I have the same reaction every time I see that bridge: it is an unnecessary extravagance. That thing most likely cost millions of dollars to build. I cross the street that is spans less than a half mile from the bridge at a traffic light.  If you are going to count that as cycling/pedestrian infrastructure, the money would have been far better off spent to improve bike lanes, make bike paths, etc. If you are going to count that as a welcome sign for San Clemente, you could make a nice one for much less. Think of the iconic welcome to Las Vegas sign. Sure, that is not our style here in San Clemente, but it represents a lot of bang for the buck. OK, flame off.

It had rained a few days before the ride and that was enough to dry out all but the worst clay mud bogs. In fact, I encountered only one muddy patch on the ride. So I made sure I to take lots of pics.

If you get stuck in the mud, at least take pics.

It was the only mud bog of the day

For this ride I decided to take the fire road option through the San Clemente Singletracks area,  which seems an odd choice in an area named after its singletrack riding, but it climbs to an overall higher point affording a pretty good view of the charred valley below.

Panoramic photos never capture the view like you hope they will, but I have to try them once in a while nonetheless

With a great climb comes a great descent. And this one ended at Trestles beach. I continued south past the decommissioned nuke plant at San Onofre and on to San Onofre State Beach. If features some quirky and little known mountain biking, closely paralleling the paved road that runs the length of the park. It also offers up ever-changing views and the occasional technical twist in the trail.

Sunlight dazzles on the surf

But the feature of the day would be the beach section, starting with a drop in to “Old Man’s”. My timing with low tide was good, I was able to ride out in the tide pool areas. My spokes collected seaweed even better than the tires glommed onto mud and sand.

Your bike might be a surf bike if the spokes and crank get full of kelp.

The final leg of the ride proved pretty tough. I was recovering from a cold and 36 miles of fat bike riding was proving more than my body was ready for. My cold was mostly gone, but it was my stomach that was unable to keep up the pace. Let’s just say it would not be prudent to go into more detail.

I have lived in San Clemente for over 20 years now, and its beauty can still take me by surprise, coming up with postcard scenes in unexpected places even for jaded residents.

There is not usually a flotilla of sailboats here, but these posed beautifully in the dazzling light of the reflection of the sun off the ocean.

Back on Coast Highway I was focused on getting home. But not too focused to stop and talk to one of the many people you see engaged in a loaded bike tour along the coast. I talked to Arthur (pronounced ar-TOOR) from Lithuania. He had ridden from San Jose to Ensenada. From there his riding buddies continued on to Mexico City and he turned around and headed back north. I told him about my plans to do a PCH ride starting in San Jose also. Arthur chose to strike this triumphant pose when I snapped his pic.

Arthur (pronounce it ar-TOOR) from Lithuania.

I did finally make it back to where the ride began: my front door. Somehow I managed to come up with a very small second wind and complete the climb into my neighborhood. Favorable fat bike ride conditions will return (for a working stiff like me) in another two weeks. I hope on that ride I can get a little more surf riding of the human-powered two-wheel variety.