I rode the Redlands Strada Rossa ride last year (RSR IV) and really enjoyed it, so naturally I was looking forward to the event this year (RSR V). I registered early and reached out to the event organizer and produced a virtual flyover of the 67 mile route, such as it was planned at the time. It later changed a little. But no one uses the flyover for navigation. And BTW, pay no attention to the “IV” on the bird logo. The flyover is indeed of the “V” ride. It has a soundtrack, BTW, but I think it is muted by default, so use the volume slider and crank it up.

Details of the route that I took are below. I modified the course beforehand since I wanted something between the 33 and 67 mile options. The ride organizers put the course on ridewithgps.com so it was easy to edit the course and download it to my trusty Garmin GPS. It was a ride not a race: cutting the course does not get you disqualified.

The weather forecast leading up to the event had me concerned. I was looking at it several times a day and the predictions kept changing. Redlands was getting rain, so who knew what the trail conditions would be by the day of the ride? The changing forecast usually called for rain on the day of the event. The ride was a “rain or shine” affair. Since the event organizers were willing to press on regardless, so was I. I packed my rain gear and was ready for whatever nature threw at us.

I left early the morning of the ride. That would have worked out great were it not for the unexpected traffic and freeway ramp closure or two. Alas, GPS navigation can only help so much. I encountered rain on the drive as predicted. But the forecast had changed yet again and called for early morning rain then clearing in time for the ride. Spoiler alert: they were right. The weather for the ride was one of those post storm days where the air was clear, the sky had a dramatic mix of moving dark and bright clouds, and conditions were changing enough to give you a feeling of adventure without ever getting rained on.

A unique place called “BikeBBQ” hosted the registration and start line. They are a non-profit community resource for bike repair and education. I encourage you to do a web search for them in Redlands. I hope for their success and the proliferation of places like theirs. It could ignite a big increase in bike use.

BikeBBQ (or Bicycle Barbeque, or whatever) is an unassuming place with great potential, and host for the registration of RSR V.

I arrived at the start line late: in between in the start times for the 33 and 66 mile routes. That seemed OK since my custom course length was between the two. The course wound its way onto a dirt path in short order, then out onto the flood plains north of Redlands, where the clouds occasionally parted to reveal  snowy mountains, sunshine, and views of the big rugged landscape of the area.

The size and view of the flood plain was pretty dramatic.

As for the trail conditions, my concerns about unridable muck quickly evaporated. Unlike the clay soil where I live and ride, the dirt in the Redlands area is mostly gravel, sand, decomposed granite and other materials that drain quickly after a rain. Having ridden similar trails in dry conditions a year ago, I would say the trails were just as rideable, just different, the day after a rain. You traded  a few small sandy sections for a few small muddy sections.

Shenanigans at the first rest stop

Greenspot Road Bridge is historic, well preserved and as iconic as ever

The bridge used to the main road back in the day when there were far fewer cars. Now it is a dedicated bike trail bridge.

The new bridge is just, so, well, you know, new.

Yes, I put my own pic in my blog once in a while

By the first rest stop I had completed my first course shortcut. I had been riding with a couple of other stragglers like myself. The shortcut allowed us to catch up to the main group of riders who started before us so it felt like being part of a big event again.

The ride up to SAG 1 was a good warm up for the climbing that followed. The course took us up the hills behind the bridge, which ascended with a pretty aggressive grade. The looseness of the mud here and there added to the challenge. Then came the rolling hills with a few short down/up sections. Normally I would take the down as fast as I could handle and carry as much momentum as possible up. But the looseness of the trails meant I could not descend as fast as usual, so I had to work more coming up the other side.

I took a break after this steep down/up section. I watched a lot of riders walk the whole thing. I made it more than halfway up the other side and only saw one rider clean it.

Between my Garmin and the course markers the route was well-marked and easily to follow. For me anyway. There was more than one intersection where I used all the navigation aids available and stayed on the course while I heard and saw other riders leave the course, then find their way back.

Kudos to the ride organizers for laying out and  marking a great course:

In a time of increased environmental awareness, I would hope that some day we can have GPS only rides. Course markers and printed ride slips are waste we can do without. I know that not everyone has, likes, knows how to use, can afford a GPS or whatever. But there are concessions we need to make and changes we need to accept in order the help the environment.

While the race organizers had official SAG stops along the ride, there were also other places where riders would collectively stop and take a break. The Mill Creek Visitor Center was one such spot. There were a lot of riders from out of the area on the ride, so many of us were not familiar with the local trails. We were admiring the course up to that point and trying to figure out what came next.

From the visitor center we could see a trail on the ridgeline of a mountain that seemed to be in the direction of the course. It represented many hundreds of feet of climbing. We all had the same reaction. “Oh no, the ride is not going there, is it?” Short answer: yes. Yes it was.

The ridgeline road to Zanja Peak, visible just below the top of the mountain. See it there?

I left the visitor center and headed for the mountain. As sometimes happens, one person’s departure makes everyone else realize that they have been hanging around a long time and it is time to get riding again. I heard the group of riders get started behind me. I thought they would all be passing me on the long climb. But much to my delight, they did not. I held my own in the large pack as we ascended the trail. In some cases my navigation skills helped because not everyone stayed on the course. But whatever the reason, I was happy to stay in the group.

The climb to Zenja afforded some inspiring views

By the time I reached the peak I needed a break so I stopped and I let the group continue on without me. There was even a bench along the side of the trail (sponsored by a local bike shop) so you could enjoy the inspiring views in comfort.

The course had taken us across the wash below

The shadow of a cloud cast on a valley carved by the water flowing off of a mountain over geologic time puts things in perspective.

I am a sucker for panoramic shots. I know they don’t work very well, but I remember the experience that went with them, so lets just say they are for me.

The panorama, shown as a video. Kind of a neat option I say.

The descent down Zenja was a fast fire road blitz. I don’t usually talk gear in my blogs, but my Salsa Cutthroat with a custom build flew down the mountain, confidently taking switchbacks and sweepers.  I have gotten comfortable staying low in the drops most of the time on the bike, which goes against the trend of upright riding positions on mountain bikes, but the position offers great control and traction.

The attack on Zenja Peak kind of took it out of me. I was ready to take an easy ride back to the parking lot. But that is not what the 66 mile route called for. It is not even what my shortened 50 mile route called for. So I busted out the Garmin and told it to navigate me back to the start by the shortest route. Happily it was almost all downhill. My rear tire, set up tubeless, had started to lose air very slowly. I decided to live with it rather than install a tube. I took it easy on the descents as the back of the bike disagreed with the front about which way to go. And by the end, even with my creative course routing, I got in a good long ride. 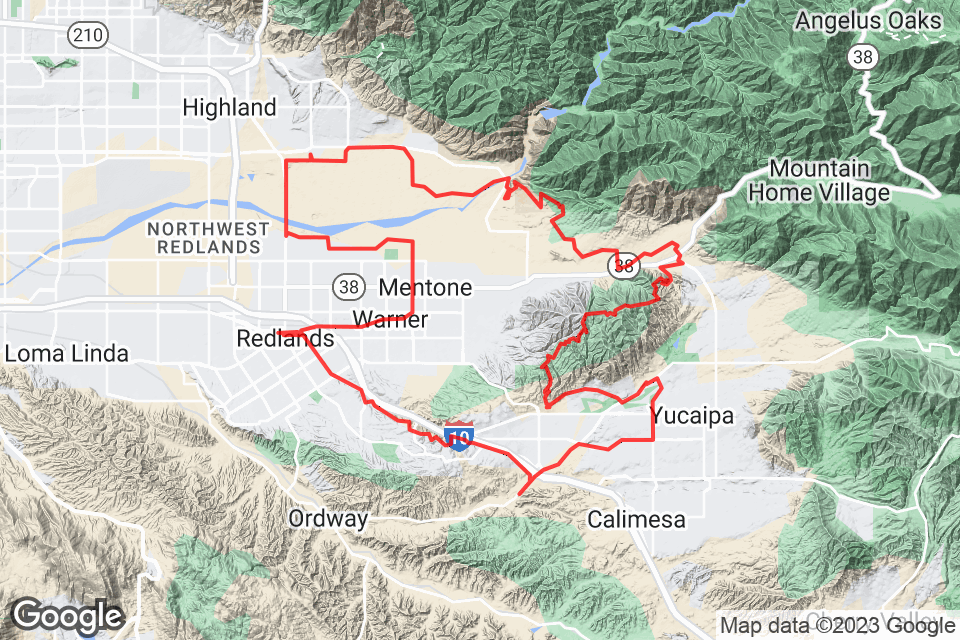 Unfortunately my schedule did not allow me to hang out at the race finish, but there was food and a big get together.  I bid adieu to the Strada Rossa and hit the road. I look forward to riding again next year.