After much anticipation, the Redlands Strada Rossa ride finally came around on March 18, 2017.  Aside from having one of the coolest names ever for a ride, it features a variety of both on and off-road riding, a format that I have always wanted to ride at an organized event. The name, Strada Rossa, means “red road in Italian. I presume the red is a reference to the Redlands venue. I had never ridden in that area before and I was excited about riding some new trails. And to cut to the chase, the ride was everything I hoped it would be. And I had some pretty high hopes for this ride. 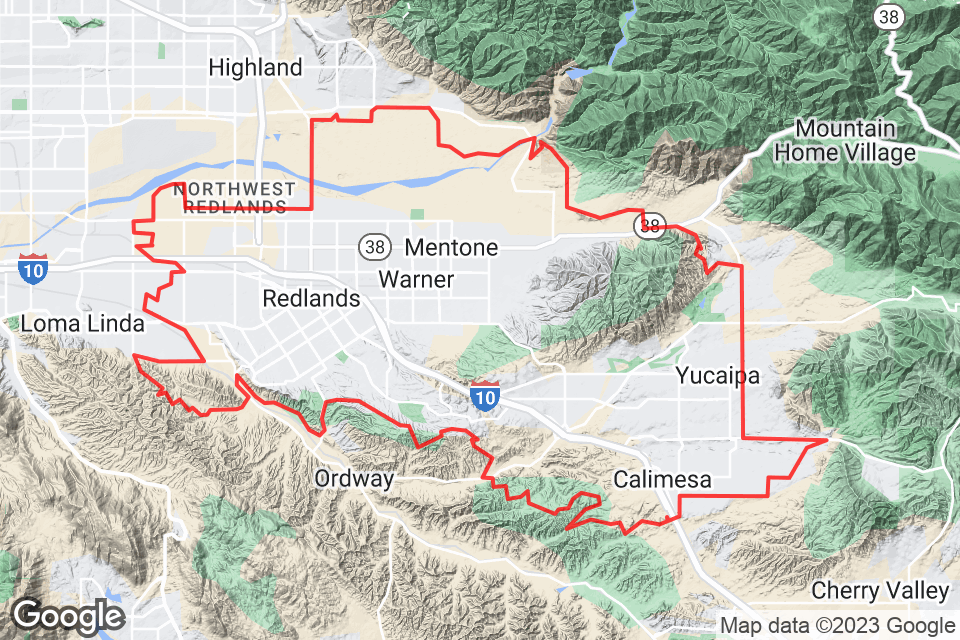 The event was an hour or two hour drive from home, starting at 8am on Saturday. So I splurged and got a cheap motel room near the event so I would not have to get up at 5am and rush out the door. Cheap motels can be adventures in themselves. The one I stayed at featured the often hyped “continental breakfast”. Although to their credit, they did offer something I had never seen before:

Seriously, all you had to do was press a button and a pancake like thing would pop out of one end of this machine a minute or so later. You did not have to add batter or anything.

I can’t say I will miss it if I never see one again. I ate the thing that came out. The parts of it that I could get unstuck from my paper plate, anyway.

The organizers of the event published their routes as GPX files, kudos to them for that, and more on that later. Using Google Earth Pro (not plain old Google Earth, mind you) and some editing software I whipped up a flyover animation of the ride. I shared it on the event Facebook page and it was well received. I think the only people that watched it to the end were me and riders wanting to visualize the route.

The ride itself was aimed at more advanced riders and that was a good thing. Let’s just say it is not a “fun for the whole family” kind of event. The off road riding was technical. There was plenty of climbing, a few hike a bikes, steam crossings, a nice assortment single track and fire/gravel roads, and lots of short sandy sections to be negotiated. I would not describe the course overall as sandy, but if you could not handle a few pedal strokes of loose sand you would have gotten off of your bike a lot.

Hardly any of the road ride sections had a bike lane, and a few sections really didn’t have much room for bikes at all. But they were in quiet neighborhoods or on lightly traveled country roads. Overall the route had the feel of being made for riders with a sense of toughness and adventure which I enjoyed thoroughly.

It was also operated on a shoestring budget compared to some of the big rides I have done. The organizers did an impressive job and made the most of their resources, providing us riders with great rest stops, nice sag support, and an after event meal and beer. The only criticism I have, and I make this with some trepidation because I don’t want to take anything away from such a great event, was the accuracy of the GPX files. The course was well marked with arrows and stickers on the ground in addition to GPX files. It was clear they made the GPX files by having someone ride the course. But the course got updated after that and the GPX files were not updated, so the GPX file and the ground markings sometimes did not agree with each other. I made a few wrong turns but figured them all out within a few hundred feet. The situation could be fixed by editing the GPX files. The organizers shared the files on ridewithgps.com (call it rwgps), which is my favorite site for this kind of thing. rwgps has a great editor and route mapper built in. You can edit or construct GPX files without having to ride the whole course over again. They shared the files directly on rwgps rather than mailing out copies of the files (which is the right way to do it) so they could have updated the files up to the very end. They were so close to being perfect about it, and in the end it was a small thing and did not matter that much.

As for my ride, I chose the 60 mile option. They offered 30, 60 and 90 mile rides. 30 miles was not that much more than I usually do, but 60 miles looked like it might take me more time than the event was scheduled for. So I decided to go for 60 and cut the course a little if needed. It was a ride not a race, after all.

The weather report was for highs in the 80s. Not super hot, but I knew I would have to pay extra attention to hydration and sunblock. I started at the back of the 60 mile group and sure enough they slowly pulled away. By the time I got to the first steep climbing I had the feeling of being out there all alone, but knowing all the while I was part of an event. It was a great way to experience a new area. On my first big descent I did a run away endo, meaning I was able to jump off the bike and run away from it. But my stem did not fare so well: it got rotated slightly. I decided to wait until the first sag stop to fix it. The stop had a mechanic there who did a fine job. The sag stop featured smoothies, too, which were great on a hot day.

The first of many gorgeous vistas

If you have ever tried to capture a picture of a great view, you know how futile it is. But I tried anyway. The ride opened up to awesome green vistas of canyons and valleys, the nearby mountains still had snow on them, and the trails seemed to go on forever.

Somewhere before Sag Stop 2 a friendly rider pulled up next to me and asked me what distance I was riding. The 3 rides overlapped a lot and I was in a section where riders might be doing any distance. When I told him I was doing the 60 mile, he told me very nicely that I was on the verge of the “cut off” time, meaning that if I kept up my pace I might return as the event was shutting down or miss the festivities. More importantly they wanted to account for all the riders and their safety. Rather than waiting forever for stragglers or injured riders to make it back, they proactively swept the course for these problems.

I had anticipated this and had a few course cuts in mind. The end result was I cut off 7 miles out of 63 and 600 feet of climbing out of 5300. It was a perfect size and challenge for me, I don’t feel bad about cutting out a couple of sections. Next year I think I will do the 60 mile option again but start with the 90 mile group. And be faster.

The big unrideable crossing. The organizers said it could be walked across though, otherwise I may not have even tried that.

A view of Greenspot Road bridge and Sag Stop 4 from high above.

Greenspot Bridge is a lovely throwback to a simpler time.

Greenspot Bridge used to be on Greenspot Road. Pretty shocking, I know. It was replaced by a much wider, modern bridge just a few hundred yards away. I bet the old bridge is too old to safely handle car traffic now and it is closed to cars. But it is fine for bikes. The remainder of the ride was a mild descent across a flood plain and back to the industrial park where it all started. The start/finish line was a little place called Ritual Brewing, a gracious host that set up the back parking lot for finish line festivities. Included in the cost of registration was a t shirt, an excellent craft beer and a generous meal. And a great ride.

I introduced myself and joined a group of riders I did not know while I ate. The guy sitting on my left started talking like an industry insider so I asked him a little about himself. It turns out he was Dave Turner, founder and namesake of Turner Bikes, whom I have been a fan of forever. Dave’s name and reputation preceded him, but he is not the kind of person that gets his picture out there much. He was super authentic and interesting and if I had not interrogated him a bit I would have never known who he was. Just one of the surprising things that can happen to you at an event like this.

And finally the Relive.cc version of my ride. They have added some nice new features lately. But since I have my own version of a flyover at the top of the blog I saved this for the end. The next event I have planned for is the MS Bay to Bay ride this fall. At this point I am thinking that the Big Bear Century might fit in nicely, I did it once before and really liked it. I will see how I feel as that date approaches. And of course, the Strada Rossa again next year.